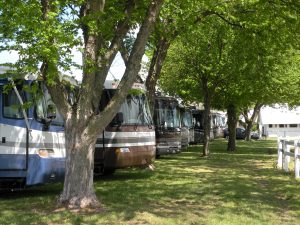 Thousands gather, including more than 200,000 during the nine-day fair each July. The rock band Daughtry will take the stage this summer for a concert that some will watch from free grandstand seats and others will buy tickets for so they can sit in folding chairs on the dirt track directly in front of the stage.

Fair officials are proposing relocating that track — all but the stretch between the stage and grandstand — to make way for an expanded livestock show pavilion as part of a master plan that may guide how the fairgrounds change over the next quarter century.

“It’s basically the first comprehensive overall master plan the fairgrounds have ever had,” said Bryan Blair, general manager.
Under the first phase of the plan, a new livestock show pavilion would be built on the grounds. The fairgrounds also needs a large, climate-controlled exhibit hall. The 30,000-square-feet Building A isn’t air-conditioned or insulated. When RV manufacturers, like Forest River Inc., have a rally there, the 850 or so people want to eat together, but could use a space that size that’s air conditioned.
For the full story click here.