Entegra to Roll Out Reatta Diesel at FMCA Show 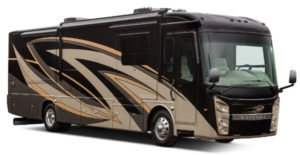 Entegra Coach, a division of Jayco Inc., announced the unveiling of the luxury rear engine diesel Reatta during the FMCA International Convention and RV Expo running July 18-21 in Gillette, Wyo.

The 37-foot Reatta is designed to meet consumer demand for a premium, more accessible package for younger RV buyers, as well as customers looking to drive a smaller luxury diesel motorcoach. Spartan’s chassis features an independent front suspension along with Bilstein shocks, providing the coach with “best-in-class ride and handling,” the release stated.

“We are very excited to add another luxury diesel coach to our Entegra Coach lineup and reach a new audience in the Class A market segment with this smaller, premium motorhome,” said Brion Brady, general manager of Entegra Coach. “This new coach, while smaller in size, offers the same luxury and premium ride that our owners have come to expect.”

The unveiling will feature scheduled media tours of the new luxury coach. Brian LaPray, national sales manager for Entegra Coach, and Spartan Specialty Vehicles President Steve Guillaume will also be on hand at the event.