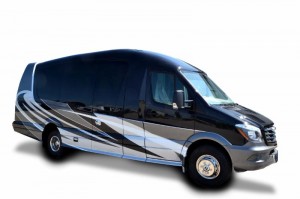 Imperial Class B motorhome by EverGreen

The Imperial, representing the builder’s entry into the motorhome market, is built on Mercedes-Benz Sprinter chassis and offers “the look and automotive luxury of an executive limousine and the comfort and amenities of a motorhome,” EverGreen stated in a press release. The Imperial is powered by the V-6 Mercedes-Benz 3.0-liter, common-rail direct injection (CRD) turbo diesel engine. The power train provides powerful, smooth, clean and quiet performance with the added benefit of exceptional fuel economy up to 24 mpg on the highway.

“The reaction the Imperial received from everyone at Open House was truly outstanding,” said EverGreen President and COO Mark Boessler. “We feel well positioned to enter the market with a luxury motorhome, especially after seeing the great response from dealers. Our goal was to convert the Sprinter chassis into a motorhome with luxury features and a lavish interior that travels as well as it camps. We’ve got a firm grip on the towable segment and now it’s time we bring EverGreen’s philosophy into motorized.”

General Manager of Motorized John Cunningham said the Imperial “will set the bar for our reputation in the motorized segment, and we want to set that bar high. We really wanted to give people something they’ve never seen before and continue surpassing expectations along the way.”

The Imperial will include a walk-through center aisle floorplan that converts to sleep two adults and the largest restroom in any Sprinter configuration. A fully-equipped kitchen features Corian countertops with a built-in sink, refrigerator and microwave. Seats are made of soft touch leather touch vinyl to be stain and water resistant, yet also soft and comfortable.

Two flat panel HD television/monitors, one in the front and one in the rear, are available along with easy connections for laptop computers. The rear television will rotate and double as an outside tailgate feature with rear stereo speakers. Tables fold out for comfort and fold away when not in use. The dash-mounted DVD, navigation and backup camera are convenient for traveling and while parked.

EverGreen will be displaying in Louisville with sister company Lifestyle Luxury RV at Booth No. 5201 in the West Wing at the Kentucky Exposition Center.