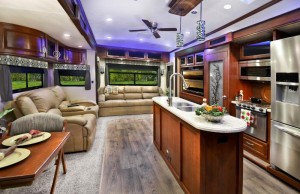 The luxury Bay Hill fifth-wheel by EverGreen Recreational Vehicles is completely upgraded for 2015. Known for its “high-end style and mid-range consumer price point,” the Bay Hill offers eight models, including the all new 375RE featuring an updated front cap and additional windows.

According to a press release, the latest Bay Hill floorplan offers an expansive rear entertaining space equipped with all the amenities for large gatherings. The focal point is a large entertainment center with a power-lift TV console and fireplace. Two opposing slides each hold a hide-a-bed sofa while theater seating separates the living room from the kitchen and dining area.

Storage abounds in the front bedroom. A large wardrobe, 60-inch dresser and second wardrobe with washer/dryer prep allow for all the essentials. A standard queen bed or king bed option still has plenty of room to walk around and move.

The Bay Hill’s fiberglass front cap received an update for 2015. A two-tone front cap displays the Bay Hill logo and insignia prominently centered on the light color cap framed along the sides by the second color. The signature brown and cream combination is standard and the two-tone gray scheme is also available. Standard LED lights remain on the cap.

Two Bay Hill models got a fresh look with more windows. The 369RL features an enormous rear window that lets in an abundance of natural light. In the 340RK a second window was added next to the bronze range hood in the kitchen. There are also additional windows in the bedroom slides allowing more natural light.