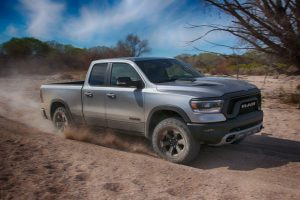 It’s been 25 years since Dodge upended the staid world for full-size pickup truck design with the 1994 model Ram 1500. In those days, Dodge was a distant also-ran to the Ford and GM trucks that dominated the market, and Chrysler felt it had nothing to lose by trying something radical.

As reported by Forbes, this year’s North American International Auto Show in Detroit was dominated by new trucks from FCA, General Motors and Ford. Unlike its chief competitors, FCA is wasting no time getting its new trucks into showrooms. Less than two months after their auto show debut, the first 2019 Ram 1500s are being built and shipped to dealers to go on sale by the end of March.

While production of the standard-cab 1500 is continuing at FCA’s plant in Warren, Mich., the quad-cab and crew-cab models are now emerging from the retooled Sterling Heights assembly plant. Now that FCA has discontinued the cars that have been built at that plant since the mid-1980s, it is utilizing this production capacity to build products that actually make money and attract customers.