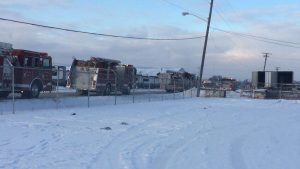 WSBT reported that the building is located in the 400 block of North Main Street in Middlebury as part of Plant 204.

At least four different departments were on scene after a call was made to Elkhart County Dispatch.

Crews say the fire started in the back of the building in the break room, however, they have not been able to identify a cause.

According to officials, 90% of the building was saved. Parts of the office and break room were destroyed, the factory portion was not impacted.

Nobody was in the building at the time.

The fire remains under investigation.