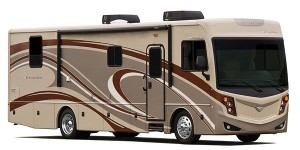 Fleetwood RV Inc.’s stylish new Excursion Class A has drawn a lot of good reviews since its debut at RVIA’s National RV Trade Show last winter as one of a handful of shorter new diesel motorhomes. But it’s not really the Excursion’s compact 33-foot length as much as its competitive $175,000 retail price tag that will draw buyers, says Fleetwood President and CEO John Draheim. The Excursion, built on a Freightliner-based Power Bridge chassis powered by a 300-hp Cummins 6.7-Liter ISB engine mated to an Allison 2100MH transmission, has undergone minor dealer-suggested upgrades since its initial introduction. But, as Decatur, Ind.-based Fleetwood prepares to roll out production in mid-April, it’s still essentially the same coach with 84-inch ceilings, 22.5-inch aluminum wheels, a 10,000-pound hitch rating, 88-gallon fresh water capacity and 174 cubic feet of exterior storage accessed by bus-style side-swing luggage doors. Inside are tile floors, a residential-style refrigerator, Volcanic Series solid-surface counters, French café doors and a drop-down 40-inch Sony LCD HD TV that automatically lowers out of an overhead cabinet. “We identified a key price segment of the diesel business that Fleetwood did not have an entrant into,” Draheim told RVBUSINESS.com after a positive showing at Good Sam’s Phoenix Rally in late March. “So, we developed this product and we took it to Louisville and a few of the earlier (retail) shows. But in those shows, we just had the unit on display. And a lot of customers, when they see a short 32- to 33-foot diesel coach, want to drive it and see how it handles. The Phoenix Good Sam Rally was the first event where we actually had a display and demo coach so customers could experience the ride and the handling that we’ve engineered into this new product first-hand.” For additional information on the Fleetwood Excursion visit www.fleetwoodrv.com.