Fleetwood RV will have the first national showing starting today (June 4) through the weekend of the redesigned gas-powered 2016 Bounder motorhome during the company’s national rally at its factory in Decatur, Ind.

The owners of some 400 Fleetwood motorhomes are expected to attend and see a full array of Fleetwood and American Coach motorhomes.

”This is the first time we’ve had our national rally in Decatur,” Steve Hileman, director of product and marketing, told RVBUSINESS.com. ”Customers can effectively see every Fleetwood floorplan, every model.”

Hillman reported the rally includes after work-hours tours of Fleetwood’s factory, noting, “They can get in all the nooks and crannies and see every part of the plant.”

A number of suppliers, including Freightliner Custom Chassis Corp. (FCCC), will be on hand and Fleetwood will offer a variety of seminars that will include driving instruction and a confidence course.

”A local hospital is a sponsor and will be providing staff to do health and wellness seminars,” Hileman said. 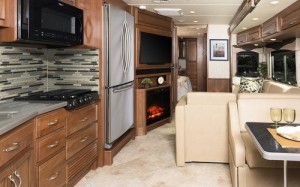 As for the Bounder, after three decades in production rallygoers will see what’s pretty much an almost all-new coach. ”Bounder is celebrating its 30th anniversary and it’s been substantially revised with lots of new features,” Hileman said.

Available in five 33- to 37-foot floorplans on a 22,0000-pound GVWR Ford chassis, external storage has been increased between 35% and 50%, depending on floorplan. ”There’s a lot more pass-through storage,” Hileman said.

With new front and rear caps and a new dash with dual monitors, Bounder also has been equipped for the first time with a multiplex electrical control system. ”Bounder always has been about simplicity and value,” Hileman said. ”A simple multiplex system was a natural fit.”