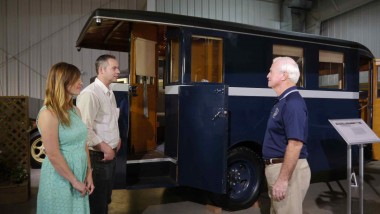 Two vintage travel trailers purchased from the RV/MH Hall of Fame and Museum in Elkhart, Ind., will be the focus this fall of an hour-long episode of ”Flippin’ RVs” on the Great American Country (GAC) cable channel.

The Hall had the units in a storage barn in nearby Bristol, according to HOF Chairman and President Darryl Searer. ”The barn was being sold, so we didn’t have any place to put them anyway,” Searer said.

Besides the renovation of the two RVs, the program will include a tour of the Hall and its 54 vintage towables and motorhomes that are on display, including Mae West’s 1931 Chevrolet House Car, John Crean’s prototype for the Bounder Class A motorhome and a 1956 Cadillac motorhome.

The couple operates Flyte Camp LLC, a Bend, Ore., company that restores trailers that are generally more than 50 years old.

”They did a lot of filming at the museum. It’s going to be one of the best episodes they’ll ever do,” Searer said.

The Scribners have been restoring RVs for 16 years.

”I had old travel trailers all my life,” said Justin Scribner, who estimated the couple has restored more than 50 RVs. ”Old is better than buying something that is a plastic shoebox.”

While spending 500 to 1,500 hours restoring a single towable, taping an hour-long TV show is also time consuming. ”It takes a lot more time to film than you think,” said Anna Scribner, adding that about 80% of their restorations are for clients who already own a vintage travel trailer.

”Flippin’ RVs” will begin its second 12-episode season in September. The Hall of Fame show will be telecast on an as-yet-unscheduled time in a Wednesday night time slot and will document the couple restoring the units.

The fall timing for the programs is particularly noteworthy, said Gregg Glass, president of Brentwood Communications International Inc. (BCII) in Los Angeles, which produces the program.

”The camping season is kind of over by that time and people can live vicariously through the show,” said Glass, whose company also produces ”Extreme RVs” for the Travel Channel and ”Animal Storm Squad” for the National Geographic channel about a group of first responders who help animals caught up in major storms such as hurricanes or tornadoes.