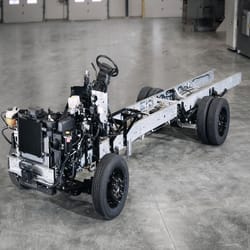 The 7.3-liter engine and 10-speed transmission combo replaces the 6.8-liter V10 with six-speed transmission, a setup that had been around for the better part of two decades. While exact performance specs will be released along with the 2020 models later this year, officials confirmed the 7.3-liter V8 would generate more torque and power than the outgoing engine, which offered 320 horsepower and 460 lb.-ft. of torque.

Although Ford debuted its new model commercial vehicles March 5 at The Work Truck Show in Indianapolis, RVBUSINESS.com was granted early access in January. In addition to the debut of the all-new F-600 Super Duty chassis cab, the new 7.3 V8 and 10-speed transmission certainly garnered the most attention, especially given its importance on the F-53 chassis — a platform that boasts more than 90% of the North American market in terms of gas-powered Class A motorhomes.

While the F-53 also gets a new steering column, instrument cluster, electrical architecture, and upgraded center of gravity capability on higher GVWR models, the new engine and transmission represent a significant milestone in that platform’s evolution.

“This will offer a step up both in performance and fuel economy,” he continued. “And when you look at durability, because it’s built for the medium duty business it’s going to run and run and run with very low and simplified maintenance.”

Beltramo pointed out the engine’s lower profile due to its in-block cam that reduces engine height and width. The result is a smaller “doghouse” compartment in the cockpit, he added, which results in a little more comfort and convenience for RVers.

Its compact package also provides greater maintenance access for technicians, Beltramo noted, and because it has two fewer cylinders it also uses fewer parts than the outgoing V10, resulting in less downtime at the shop and lower long-term ownership costs.

As for the 10-speed TorqShift automatic transmission, it features a wider gear ratio span than the 6-speed and is designed for the harshest towing conditions. The heavy-duty transmission continues to offer class-exclusive live-drive power takeoff, which allows the operator to engage industrial equipment and accessories, such as snowplows, with the truck in motion.

The electronically controlled transmission has selectable drive modes that include normal, tow/haul, eco, slippery, and deep sand and snow. Worth noting is that — even with four extra gears — the entire unit is engineered to fit in the same space as the outgoing 6-speed and yet weighs only 3.5 pounds more.

“In general we’re just trying to improve the overall drivability,” Beltramo said. “Fundamentally, if you think about merging on the freeways and accelerating, this will bring a more comfortable experience. It just moves the performance of the vehicle a bit closer to a car in terms of its ability to manage in traffic.

“If you think the gasoline RVs, people want the RV experience, but they’re also trying to not move dramatically away from the vehicles they’re used to driving day to day. So, any features we can bring that bridge the gap to the functionality of the cars — the driving experience, the safety devices — that just makes the (recreational) vehicles more friendly for somebody’s who’s not driving it every day,” he continued.