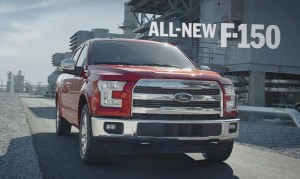 Ford Motor Co. is using the first-ever College Football Playoff to launch the advertising campaign for the redesigned F-150, but viewers won’t hear a word about how the truck’s lighter aluminum body helps improve fuel efficiency.

Instead, the initial series of three commercials aims to show that the switch from steel to lighter-weight aluminum makes the F-150 more durable and stronger. According to Automotive News, the fact that the F-150 is the most fuel-efficient full-size, gasoline-powered pickup available won’t be mentioned until a fourth ad begins running at a later date, Ford said.

Ford is starting the ad campaign for the redesigned F-150 earlier than it normally does for new vehicles, and the EPA ratings were released too recently to incorporate into the first ads. But the approach also indicates that Ford sees more potential to hook buyers with the truck’s capabilities — and unique additions such as a remote tailgate release — than with its fuel economy, which is improved but not as far ahead of competitors as some might have thought aluminum would take it.

Ford officials said that was the plan all along, and that the company has not changed its strategy with the F-150 as gasoline prices have plunged this month to their lowest level in more than five years.

“I believe it does not diminish at all the consumer’s desire for more fuel-efficient products,” Ford CEO Mark Fields told reporters this month.