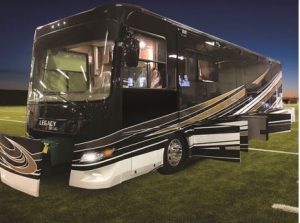 Forest River Inc.’s diesel pusher division will reintroduce its revamped Legacy Class A motorhome lineup next week at the Hershey Show, followed by an appearance the week of Sept. 19 at the Elkhart County RV Open House.

”We originally introduced Legacy in 2015 but we wanted to make some changes to it so we took it out of production for almost a year,” said Michael Peterson, sales and product manager for the Elkhart-Ind., based division.

Legacy for 2017 initially will be available in three 34- to 38-foot floorplans on a 27,910-pound GVWR Freightliner ISB chassis with a 340-hp Cummins six-speed 6.7L turbo diesel engine. A fourth floorplan — a 34-footer — will be available early next year.

The 2017 Legacy series will have between two and four slideouts, depending on the floorplan, and among the new offerings is the 38C, a four-slide bunkhouse model with two full baths.

”We went through the Legacy and changed the exterior and interior with new front and rear caps, new paint schemes and furniture,” Peterson said. ”We also added hydraulic slides, slam latch baggage doors and there’s a new multiplex system that controls the slides, lighting and generator that sits in a slideout in the front cap, among other things.”