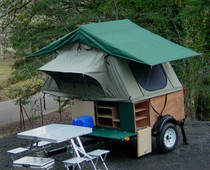 Compact Camping Concepts (CCC) founder, Scott Chaney, claims his do-it-yourself focused camping trailers “are unique in the camping industry,” According to a report by RVing Examiner.

Designed specifically for the cost conscious, no frills, camping enthusiast Chaney’s compact lightweight tent top camper solutions were inspired by the simplicity of those vintage tent trailers of yore and are aimed squarely at those who, as Scott puts it, “enjoy unplugged camping.”

Chaney, a former IT Program Manager, incorporated his Salem, Oregon-based camping company in 2007 shortly after becoming a member of what he ruefully describes as Hewlett-Packard’s “cast-off employees society.” Fortunately, “I always had that need to take things apart and put them back together,” said Chaney. “I can think all the way back to when I was a little kid building models. I’d build it first and then I’d take two or three other models I had, take them all apart and combine them into a single model that was better than the rest.”

Chaney, who probably had no inkling that his childhood fondness for Tinker Toys and Erector Sets would culminate over three decades later in the creation of a prototype quarter ton, top loading, military-style camping trailer with an onboard tent, added, “It ended up getting sold within two camping trips.”

To read the entire article and view a slideshow click here.