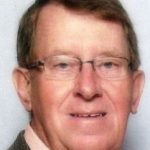 He was born March 7, 1943, in Elkhart, Ind., son of the late Warren Arthur Hartman and Marie Bernice Schwalm Hartman.

He was a member of First Baptist Church in Douglasville, Ga.

He is survived by his loving wife of 40 years, Brenda L. Willey Hartman of Buchanan; his children, Becky and Doug Campbell of Buchanan, Andrew “Andy” and Anna Hartman of Canton, Angie and Gary Smith of Zebulon, Ga., and Joy Hartman of Carrollton, Ga.; brothers Rudy and Lavonda Hartman, Terry and Su Hartman and Tom and Joyce Hartman, all of Wakarusa, Ind.; and four grandchildren.

A memorial service was held on Jan. 27 at Hightower Memorial Chapel in Douglasville. In lieu of flowers, the family requests that memorial contributions be made to the American Cancer Society at www.cancer.org. Messages of condolence may be sent to the family at www.martin-hightower.com.