By: RVBusiness|Published on: May 10, 2018|Categories: Today’s Industry News| 0 comments 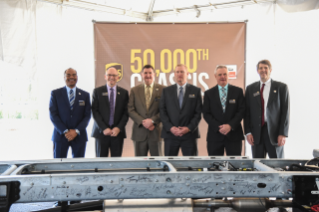 A two-decade partnership among two of the most respected names in the work-truck and parcel-delivery industries reached a major milestone, as Freightliner Custom Chassis Corp. (FCCC) delivered its 50,000th chassis to UPS.

According to a press release, leaders from UPS and FCCC were on hand at FCCC headquarters in Gaffney, S.C., recently to mark the official delivery of the milestone chassis, which was specially branded and displayed for the event. Roger Nielsen, president and CEO of FCCC parent company Daimler Trucks North America (DTNA), was on hand with other DTNA leaders for the celebration, along with elected officials and civic leaders from Gaffney and Cherokee County.

“This is a momentous and special day for FCCC, one that is the culmination of an incredible amount of teamwork, dedication and effort on the part of a lot of people over the past 20-plus years,” said Jeff Sather, president of FCCC. “This is also a day that certainly wouldn’t be possible without UPS, a customer who views us as much more than just a vendor – but rather as a valued, strategic partner, as they have for more than two decades.” 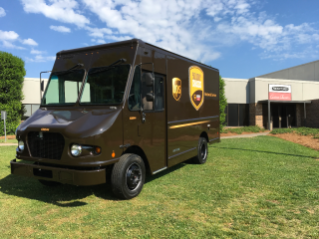 While more than half of the 50,000 chassis delivered to UPS have been either gas- or diesel-powered, FCCC and UPS have long developed and deployed a range of alternative-fuel products including hybrid-electric, hydraulic hybrid, electric, compressed natural gas (CNG) and propane-autogas.

“UPS has become – and remains – the global leader in logistics and delivery by being efficient, reliable and forward-thinking,” Sather added. “In turn, they need their delivery vehicles to be efficient and reliable. We’re honored they continue to entrust a significant portion of their fleet to us and we’re excited about what FCCC can help them accomplish over the next 20-plus years.”