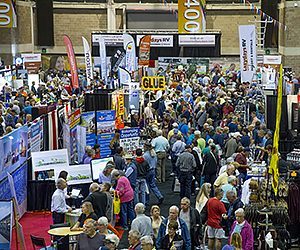 According to a press release, the following week, Region 1 started the regional show schedule at the Fort Myers RV Show. The winter show schedule will conclude in early March at the Ocala RV Show.

The Fort Myers RV Show, celebrating its 33rd year, saw 11 dealers and close to 100 vendors reap the financial benefits of participating in this annual four-day event. According to Show Manager Jack Carver, the event opened strong with long lines waiting to get in on the first day, which featured a discounted admission.

“Attendance overall was good with just under 11,000 paid attendees,” he said. “Unfortunately, for past several years the show has been afflicted with poor weather and this year was no exception with strong winds Friday and Saturday, followed by the heavy threat of rain all day Sunday.”

The Jacksonville RV MegaShow held at the Jacksonville Equestrian Center ran the first week in February. Just over 9,900 people came through the ticket gates during the four-day show — the highest number of attendees ever recorded at the Jacksonville Show. “We had more than 4,000 people come out on Saturday alone, so we knew it was definitely going to be a record-breaking event,” said FRVTA Region 6 President Ken Loyd. “We were also very fortunate that the weather forecast, which had called for rain just a few days before, changed and we had great weather during the entire show.”

Rounding out the February show schedule was the West Palm Beach RV Show held at the South Florida Fairgrounds. The eight participating dealers were pleased with traffic and sales as over 6,100 people attended the show. “We had a couple of deals the very first day,” said FRVTA State Secretary Brian Copley. “With a great crowd on opening day along with securing a few deals, I just had a feeling this was going to be a great show, and it was.”

The last show of the winter selling season took place March 1-4 at the Horse Park in Ocala. Four days of beautiful weather greeted the 6,300 people that attended the show, up about 24% over last year’s attendance. “Just about every dealer and booth exhibitor I talked to was very excited about the results of the show,” said FRVTA Show Coordinator Patty Flanagan. “The addition of the petting zoo, roving entertainment and the DJ really made for a more festive atmosphere”.