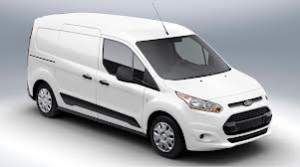 The aluminum F-150 pickup has gotten all the publicity, but it’s not the only high-stakes truck move the Ford brand is making this year.

The 2014 Transit Connect Van and Wagon are arriving in dealerships now. And the full-sized 2015 Transit commercial van goes on sale this summer. Together, the Transit van family represents a change for Ford almost as significant as the shift from steel to aluminum in the F-150.

With the rear-wheel-drive Transit, Ford is replacing the body-on-frame E series, the market leader and a profit machine for nearly three decades. In its place will be a unibody commercial van that was designed in Europe and adapted for the United States. Gone are the two V-8 engines and the 6.8-liter Triton V-10, replaced by two V-6s and a five-cylinder diesel.

As with the F-150, Ford is taking a big chance, replacing a proven market leader with something radically different — but not totally new. Ford has sold more than 7 million Transits in 119 markets since introduction in 1979.

In the United States, the E series has been shouldering the load for Ford’s commercial and large passenger van business since Richard Nixon was president, dominating the market almost as much as the F series rules the pickup field.