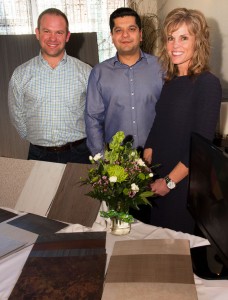 Genesis Products, an Elkhart, Ind.-based supplier of laminated panels and interior components to the RV industry, hosted an Open House Tuesday evening (March 17) at the 523 Tap & Grille in downtown Elkhart to officially announce its partnership with Greenlam America Inc.

The informal event also provided the first opportunity for many in the industry to acquaint themselves with Greenlam and its 2016 collection of high-pressure laminates (HPL).

“Genesis Products has been in the industry for more than 12 years,” said Heather Jenks, vice president of RV sales. “We’re a laminator of films — pretty much any type of material that we can laminate to a substrate is what we do. Up to now, we’ve not had a really good, strong HPL line — something that offers great design coupled with the service and price that the RV industry requires.

“That’s what Greenlam brings to this industry: beautiful designs, and the service that we’ve been asking for at an attractive cost. By partnering with Greenlam, they give us an edgy, out-of-the-norm look. It’s not what you’ll see in an everyday RV. It’s trendy, cutting-edge — and we’ll be able to provide it at a cost point that’s affordable.”

The laminates, Jenks noted, are made to be durable and scratch-resistant, making them suitable for everything from countertops to backsplashes and even accent walls in bathrooms. “They also weigh less than any other type of solid-surface product.”

“Genesis is a perfect fit for us,” Sharma said. “It’s a young company, like ours, and they are willing to do things in a different way. We were trying to change things from the ‘old way’ of doing business with a company that is open to new ideas.”

Greenlam, Sharma added, has been manufacturing high-pressure decorative laminates for 15 years. “We’re the fastest-growing laminate manufacturer in the world,” he noted, “with two plants and 2,500 employees.”

For Genesis, the partnership is the latest venture for the Elkhart supplier founded in 2002 by Jon Wenger and Jon Helmuth that now operates five manufacturing facilities — including two each in Elkhart and nearby Goshen. Named one of the 500 fastest-growing private companies in 2007 by Inc. Magazine, the firm provides an array of interior wood products to several industries, including residential, hospitality and office. That diversification works to the company’s advantage.

While Tuesday’s open house marked the official debut of the Genesis/Greenlam partnership, Jenks said the company actually had a “soft launch” several weeks previously as it began presenting the new product to its OEM customers.

“A lot of people in the industry have seen it and are excited about it,” she said. “It’s always enjoyable when you can come to market with something that hits the marks for service, quality, design and cost that no one’s seen before.”