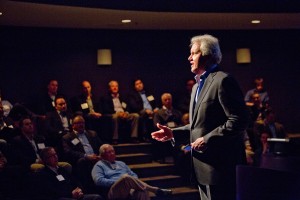 One of the nation’s corporate opinion leaders told a closed door meeting of RV industry executives on Thursday (Feb. 26) in Elkhart, Ind., that he’s pleased to see the recreational vehicle sector enjoying a resurgence amidst an “incredibly robust vibrant economy.”

Jeffrey Immelt, CEO and chairman of General Electric (GE), one of the world’s largest and most successful industrial manufacturing and lending conglomerates, toured a Thor Motor Coach (TMC) production facility in the morning and spoke to 80 RV executives in the afternoon.

“It’s great to see the industry doing as well as it’s doing right now,” he said. “You had unemployment that was bad enough to bring a president here, and now pretty much anybody who wants a job can get a job. You have a situation that’s quite good for your business because the economy is getting better and gas prices are getting cheaper. If there’s anything that helps the recreational industry, it’s those two things.”

GE, among America’s most iconic companies, GE traces its beginnings to Thomas A. Edison and the Edison Electric Light Co. in 1878. Today, it employs 307,000 people and has interests in 175 countries with 2013 revenues of $146 billion.

GE operates eight different businesses – each of which would be its own Fortune 500 company – including Appliances & Lighting, Aviation, Capital; Energy Management; Healthcare; Oil & Gas; Power & Water; and Transportation.

It’s best known in this industry for its GE Capital Commercial Distribution Finance (CDF) unit, a leading wholesale lender to dealerships from coast to coast. The RV industry is a natural fit for GE Capital, which focuses on the “middle market” of the 200,000 companies whose revenues fall between $10 million and $1 billion annually, Immelt explained.

“For us, the best GE Capital businesses are the ones that can combine financing with some operating skill,” he said. “Whether it’s underwriting a specific industry, or whether it’s doing distributive financing. These are the kinds of business that, over time, are focused on an industry that combine both manufacturing and finance. This is where GE Capital has flourished.”

Immelt was asked when the next economic downturn might occur, and he said he looks at certain indexes to gauge the health of the economy, including mid market capital expenditures.

“There’s a lot of green lights at work right now. You see a very healthy consumer with relatively low interest rates still, so people who have a job feel like they’re wealthy,” he said. “What you don’t see in the U.S. just yet is big capital expenditures. All of us in this room have gotten more conservative. We just came out of this crisis and I just think we’re all sitting on our wallets a little bit.”

A cynicism during boom times is healthy, he acknowledged, but “for all our futures the difference between 2.5% growth versus 3.5% is meaningful.”

CDF’s RV Group President Tim Hyland said the compelling motive for Immelt’s Elkhart visit can be traced back several years ago to Columbus, Ohio, when GE Capital and Ohio State University partnered to create the National Center for the Middle Market, which includes an annual event to highlight the efforts of the center.

Bob Martin, president and CEO of Elkhart-based Thor Industries Inc., attended one such event last year where he met Immelt. The two discussed the RV industry and Immelt said he’d like to visit the 50,000-population northern Indiana city and see it first-hand. Several months of correspondence later, Immelt made the trip.

“It’s been a great day. We had great representation from our manufacturer partners and Jeff was fantastic, so we’re really excited about the day,” Hyland said.

Immelt’s visit began with a tour of the production facility where TMC builds the ACE and Hurricane gas motorhomes, along with a display of a variety of products from other Thor  divisions, including an Airstream travel trailer and TMC Tuscany diesel pusher. Following the tour he enjoyed a private luncheon with eight select RV industry executives in the boardroom of the RV/MH Hall of Fame.

The day culminated at an afternoon audience with the RV industry’s top executives in the Hall of Fame’s theater. Billed as “Immelt Unplugged,” the charismatic yet casual CEO provided an overview of GE that delved into its corporate philosophies as well as management culture before he fielded about half a dozen questions from the audience of about 80 RV industry executives.

While saying the economy is improving daily, Immelt, who served two years as chairman of President Obama’s Council on Jobs & Competitiveness, acknowledged the existence of geopolitical risk and other uncertainties that can create havoc. In addition, certain domestic issues, such as passing a federal budget, can have an impact, he pointed out. But the improving economy is “a positive for American manufacturers, especially everybody in this room,” he said.