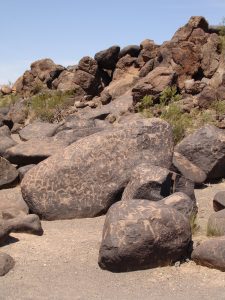 When Scott Swanson and his mother acquired a relatively undeveloped campground in Gila Bend, Ariz., 18 months ago, they knew it had potential as an affordable winter park for snowbirds.

So they joined the Kampgrounds of America (KOA) franchise network to put the park on the travelers’ map and started making improvements to bring their 130-site campground up to KOA standards.

But even after investing over $250,000 in improvements that include new landscaping, utility connections, a 4,000-square foot dog park, a 2,500 square foot veranda, and remodeling the park’s recreation room, the number of overnight guests and monthly snowbirds coming into their campground has already surpassed their best expectations.

Swanson isn’t the only one who sees a brighter future in Gila Bend. So does Gila Bend’s new town manager, Michael Celaya, who is spearheading a series of improvements to Gila Bend’s historical points of interest to raise its profile as a tourist destination and playground for winter snowbirds.

“I see us as the next Quartzsite,” said Celaya, referencing the tiny desert town 20 miles east of the Colorado River that hosts the largest winter RV show in the nation. “We get so many seniors coming through Gila Bend, we should be a destination.”

Gila Bend, Celaya notes, is already at a major crossroads. Sitting alongside Interstate 8, it carries thousands of travelers each week who make their way from Phoenix and Tucson to San Diego. Gila Bend also straddles State Route 85, which carries travelers across the Sonora Desert to Mexico, crossing the historic Tohono O’Odham Indian Reservation.

The challenge, of course, is getting travelers to stop to see what Gila Bend has to offer. But the town of Gila Bend is working with the Chamber of Commerce and the local business community to do just that.

Gila Bend is making improvements to the Gatlin archeological site, which features remnants of native Hohokam farmers who lived in the area between 800 and 1,200 A.D. The site, a registered National Historic Landmark, is owned by the town of Gila Bend.

The town of Gila Bend also recently acquired Stout’s Hotel, a historic two-story, 26-room hotel designed and built in 1928 by Henry Trost, a famous architect known for his work with Mission, Pueblo Revival, Art Deco and Prairie architectural styles. The hotel, which used to house railroad workers, closed in the 1980s, but will be reopened for tourists in fall of 2018 after improvements are completed.

Other attractions include a 1,200-square foot museum, housed inside Gila Bend’s Town Hall, which includes Native American and Western artifacts. A park in town even has a 4-ton remnant of the Twin Towers, a somber historical artifact from 9/11, which local fire department volunteers brought to Gila Bend as an enduring tribute to those who lost their lives on 9/11.

“It’s pretty moving to see it,” said Christina Hubbard, coordinator for the Gila Bend Chamber of Commerce. “You can see that it’s been ravaged and fire burned.” Local residents can purchase pavers at the park to honor their loved ones at the park.

Meanwhile, the Gila Bend Chamber of Commerce is working to organize major rodeo and western themed events for a new Butterfield Stage Days Rodeo, which will take place in March of 2018. Hubbard said the event, which will include rodeo queens, music and activities, could bring thousands of new visitors into Gila Bend.

Gila Bend and the local chamber are also promoting other nearby sites of interest, including Painted Rock Petroglyph site, which sits on Bureau of Land Management property roughly 23 miles west of Gila Bend.

“There are a lot of historical and natural resources around this area that people come to see,” Hubbard said, noting that Gila Bend is not only located along the Butterfield Stage Route, but the Juan Batista de Anza and Mormon Battalion Trail as well.

Other nearby attractions include the historic copper mining town of Ajo, 30 miles to the south, and the Gillespie Bridge, a historic 1,660-foot long bridge, built in 1927, that crosses the Gila River roughly 23 miles north of Gila Bend. Another scenic site, Organ Pipe Cactus National Monument, is roughly 60 miles south of town.

All of these attractions are enough to keep people busy for at least two or three days, if not longer, said Celaya, the town manager.

Meanwhile, Swanson is making additional improvements at the Gila Bend KOA in preparation for next winter. They include a new heated swimming pool, and a 1,500 square foot restroom/shower building with a dog wash station, which will be completed this spring. Swanson also plans to open a reptile exhibit with rattlesnakes and other desert creatures later this year.

The Gila Bend KOA is affiliated with the Arizona Association of RV Parks and Campgrounds, which hosts www.GoCampingInArizona.com, the statewide travel planning website.