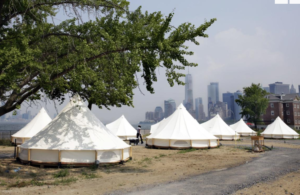 Just imagine it, a luxurious room on an island, with chef-prepared meals and a view of the Statue of Liberty and the Manhattan skyline.

There isn’t a leaky tent, musty sleeping bag or can of baked beans in sight.

“We’ve tried to create an experience where people can put all those concerns aside and connect to the place that they’re in, the people that they’re with and themselves,” said Peter Mack, CEO and founder of Collective Retreats, which has developed similar camps in Colorado, Montana and Texas.

Visitors staying in the 27 smaller journey tents share bathroom facilities; those staying in the 10 larger summit tents have their own private, en suite bathrooms, spa robes and even a campfire s’mores kit.

The location, Governors Island, is a 172-acre plot of land that sits just off the southern tip Manhattan, with stunning views of the city’s Financial District, the Statue of Liberty and Ellis Island. Formerly used by the Army and Coast Guard, a portion of it is now home to a national monument overseen by the National Park Service, while the majority was transferred over to the city and state for the benefit and use of the public.