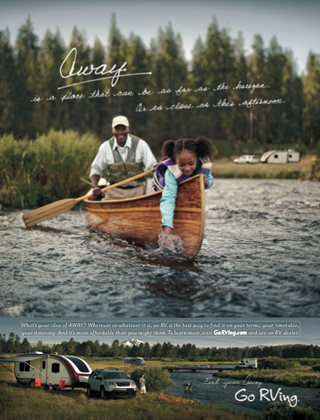 The Go RVing Coalition received a positive report on the progress of the industry’s Go RVing marketing campaign at its Monday afternoon (June 11) meeting at the Willard InterContinental Hotel in Washington, D.C.

The new “Away” theme of the campaign, designed to expand the market, represents a return to a use of softer outdoor “lifestyle” imagery not unlike that used in the earlier years of the 16-year-old, all-industry campaign.

“I think it went very well,” reports Coalition Co-Chairman Tom Stinnett, president of Tom Stinnett Derby City RV, Clarksville, Ind., and a partner in Clarksville-based Equine Motorcoach. “I think that the results speak for themselves. There’s positive increases in almost everything we’re doing. There’s very interesting digital marketing improvements and a lot more feedback from our customers in that area where we’re currently expanding. I think, overall, it was a very good meeting.”

“The headline I’d put on it is: ‘How Does Go RVing Continue to Do It?’” remarked the other co-chairman, Bob Olson, the recently retired chairman of Iowa-based Winnebago Industries Inc. “I think it was a very positive meeting. You look at the strategy change that we did last year, and getting more in to the social media part of advertising platform, I think, is going to pay dividends beyond any of our wildest dreams.

“And I think that what really encouraged me most was the fact that we’re already talking about things that we’re going to move into next year and the year after that, which gives me confidence that the people that we’ve got in place right now on the RVIA side and the consulting group that we’re utilizing really know their stuff when it comes to the best way to get to that consumer.”

Among the high points in Monday’s presentations by RVIA staff, which administers the national campaign, and The Richards Group, the Dallas agency with whom the coalition has worked for several years:

• Of the visitors to GoRVing.com, more than 115,000 arrived via a mobile device, and of those, roughly 10% came via the QR code in Go RVing’s print ads.

• The Great American Country and Outdoor Channel partnerships generated more than 811,000 entries as part of the coalition’s sweepstakes. These entries also yielded more than 46,000 new leads from entrants who opted in to receive additional information from GoRVing dealers, manufacturers and campgrounds.

• The coalition is seeing a 53% increase in consumers arriving at the GoRVing.com website via digital routes.

Go RVing, meanwhile, expects 2.9 billion media impressions in 2012 from its overall advertising campaign – print, digital and otherwise, according to James Ashurst, vice president of public relations and advertising for RVIA.

“The coverage that we’re getting across the board, whether it’s ‘Fox and Friends’ or Major League Baseball is behind the good report,” added Olson. “I think it speaks volumes for the acceptance of the RV lifestyle. And, you know, as long as we’ve got that, I think we’re going to continue to grow as an industry.”