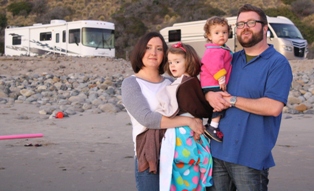 Custom-produced RV travel and camping vignettes will be a key element of Go RVing’s all-new “AWAY” campaign launching in February.

There will be a dozen vignettes airing on popular networks throughout the year, including SPEED, Great American Country, the Cooking Channel, the Outdoor Channel, National Geographic, Nat Geo Wild, the NFL Network and CBS Sports.

• Go RVing teamed up with SPEED personality Rutledge Wood for a 60-second vignette featuring his family enjoying a beach getaway in a Vesta provided by Monaco RV LLC. It will air throughout racing season on SPEED beginning Feb. 21.

• In early February, two 60-second vignettes featuring country music artist Chuck Wicks were shot in Nashville utilizing a Lance travel trailer that will be awarded as the grand prize in “Go RVing’s Ultimate Country Music RV Giveaway” sweepstakes with Great American Country. Wicks is featured enjoying a weekend getaway with friends in one spot and on a hunting trip with his Dad in the other. The custom spots begin airing on March 19 on Great American Country to promote the sweepstakes.

• In a continued partnership with both National Geographic Channel and Nat Geo Wild, the networks will promote the new series, “Untamed Americas,” with three 30-second vignettes that include RV targeted messaging accompanied by b-roll footage. The vignettes air Feb. 28 through May 28 on both networks.

• A first-time venture with the Cooking Channel includes a 30-second custom vignette highlighting simple, RV-friendly recipes in conjunction with “The Perfect 3,” a new show featuring recipes made from three ingredients. This will air during the program from April through June, including a Memorial Day marathon.

• To promote RV tailgating, a vignette on the dedication of NFL tailgating enthusiasts will air in the fall of 2012 on NFL Network. Meanwhile, CBS Sports will celebrate college football traditions with an in-studio feature about the unique tailgating traditions of each team’s fans during Inside College Football or SEC Studio Show. A Go RVing Football Series will feature on-screen custom RV animations and factoids during SEC football match-ups.