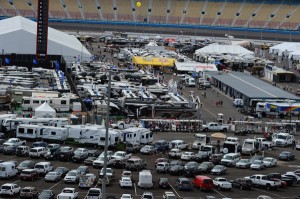 RVs line the Phoenix Raceway for The Rally

Good Sam Enterprises LLC, an affiliate of Camping World Inc., appears to have hit a home run this past week in hosting a bustling consumer rally Mar. 22-25 at the Phoenix International Raceway that was busier than anything the industry has seen in years.

Good Sam spokesmen report that the total coach count at The Rally – 3,370 units comprising about 7,500 people – was amplified by 9,000 to 10,000 day pass visitors during the four-day event. The result was an impressive crowd that drew heavily from the Southwest region and from an established base of Arizona snowbirds and spring baseball training fans.

Participating in outdoor displays were some 27 manufacturers. The indoor exhibits included about 350 10-by-10 booths, and both areas were sold out, reports Terry Thompson, vice president of sales for Good Sam.

Not since a Redmond, Ore., rally in 2005 had Illinois-based Good Sam, then known as Affinity Group Inc., seen traffic like this. “It was a great rally,” said Thompson, whose firm started hosting rallies in 2000. “It’s the biggest rally we’ve had in a number of years. In addition to the 3,370 rigs, we had a lot of drive-ups that came in and, fortunately, not a lot of cancellations. And so we haven’t had a rally like this in years, quite frankly.” 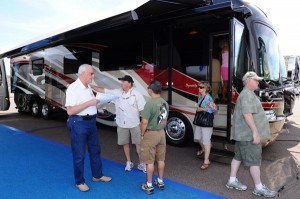 Beyond the social and commercial aspects, and the seminars and frontline entertainment — including Bill Cosby and Martina McBride – the Arizona location was the biggest factor in attracting a crowd, Rally Director Sue Bray maintains.

“It went really well,” said Bray. “People were very happy, and Phoenix is a great destination. We worked really hard to try to do some grassroots marketing to bring in the day traffic. We went around to all the campgrounds and left two-for-one coupons for day passes. We did some TV advertising and we also promoted at the local Camping World stores. That was all stuff that we had not really done before, and so I think it paid off. But also I think that people really want to come to Phoenix and I’m glad that we finally found a place that can accommodate the event.”

Bottom line, Bray agreed, the basic show formula with some tweaks seems to have survived the economic downturn – a fact that might be confirmed in subsequent Good Sam rallies this year as the company expands its consumer-centric rally schedule for the first time from one to three events. Upcoming venues are June 21-24 in Louisville, Ky., and Nov. 2-6 in Daytona Beach, Fla.

Good Sam/Camping World Chairman Marcus Lemonis says the biggest difference in opting for a racing facility in Phoenix vs. traditional show sites like Redmond and Perry, Ga., is that they had to build their own infrastructure. 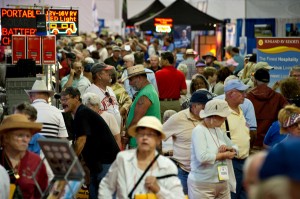 Indoor exhibits were packed at The Rally

“There was nothing here other than asphalt,” said Lemonis, “and I think we’ve proven that we can go into major metropolitan markets and not only serve the RV community and the snowbirds that were there, but also we were expecting a lot more people over five days in terms of day passes compared to Redmond, which was 2,000, because you have a base of four million people in Phoenix.”

One other noteworthy twist at Phoenix from an industry perspective was the rather surprising participation of rolling stock dealers not affiliated with Camping World RV Sales, a sister company to Good Sam and the nation’s largest RV retailer.

“You’ll notice that the Camping World presence was not that predominant here,” Lemonis told RVBUSINESS.com. “You don’t really see it. There were 19 dealers other than us in Phoenix, and that was a really important priority for me. You know, La Mesa, Lazy Days, Paul Evert’s, McMahon’s, Robert Crist and Orangewood were involved. The point is that this was not a Camping World event. This was a Good Sam event, and they really are different. Yes, Camping World had a (parts and accessories) store (at the Phoenix Raceway), like they do at a lot of events like FMCA rallies, and the Camping World dealership had a display along with 19 other dealers. So, it was really a Good Sam event.”

How did Lemonis, a controversial industry figure who had all but secluded his company from the rest of the industry a year ago, succeed in convincing those independent dealers to participate in a function sponsored by a Camping World affiliate, an arch-rival in effect for several of them?

“We didn’t really talk dealers into coming,” added Lemonis. “We gave the manufacturers our word that it would be fair and free enterprise. They are the ones that actually buy the space. They’re the ones who took the chance. They seemed extremely pleased. At the end of the day, if you (manufacturers and dealers) come and you have a good experience and sell product – whatever your opinion is — you don’t care. Selling RV’s is what matters.”