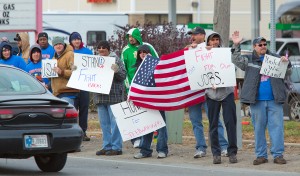 “Keep our jobs in America!” shouted one angry Cequent worker, a member of the local United Steelworkers union. “Made in the U.S.A.!” shouted another.

According to a Goshen News report, drivers honked their vehicles and members of the community shouted their support as Cequent Performance Products workers picketed along U.S. 33 in Goshen, Ind., near the entrance to the plant Monday (Oct. 29) afternoon.

Local union vice president Deb Hathaway said the picketers — and Cequent workers in general — have felt the support of the community ever since Cequent’s parent company, TriMas, announced Oct. 18 that the production lines at the Goshen plant may move to Reynosa, Mexico, putting around 450 jobs in jeopardy.

“This means a lot to have their support,” Hathaway said. “This doesn’t just impact the 450 workers here at Cequent — it impacts the whole community.”

Many of the picketers have worked for Cequent for several years. Mark Schmanski has worked for the company for nearly 20 years. He said he’s never missed a day of work.

“I was shocked for the first couple of days after I heard (the announcement),” Schmanski said. “Now I’m angry. This building has made millions and millions and millions for this company. I would understand moving the jobs if this was not profitable, but this is just about greed.”

Schmanski said no one from TriMas Corp. came down to the plant to tell the workers, but rather someone from the plant’s management made the announcement.

Employees weren’t the only ones on the picket lines Monday. Brendan Mullen, the Democratic candidate for Indiana’s U.S. District 2 House seat, was at the protest alongside USW workers.

“I’m here today because we need to keep Hoosier jobs here,” Mullen said. “For this company with such extraordinary profits to ship jobs overseas is unacceptable.”