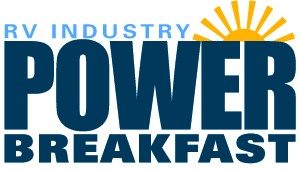 Indiana Gov. Eric Holcomb will keynote the first half of the 2017 RV Industry Power Breakfast, a fast-paced, information-rich event catering to recreational vehicle industry constituents as well as area civic and business leaders. The Power Breakfast is scheduled to take place from 7 a.m. to 9:45 a.m on Thursday, May 11, at the RV/MH Hall of Fame’s Northern Indiana Event Center in Elkhart, Ind.

Anchoring the second half of the Power Breakfast will be a six-person panel discussion including two RV OEMs, two suppliers and two dealers who will touch on an array of contemporary topics:

This year’s dawn-breaking event, the buffet for which starts at 6:45 a.m., again caters to manufacturers and suppliers from Elkhart County, but increasingly draws industry people from outside Northern Indiana’s RV-building zone.