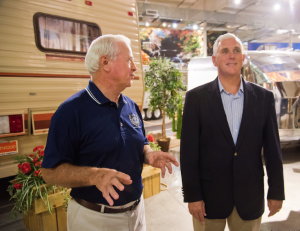 Saying it was “common sense” legislation, Indiana Gov. Mike Pence signed SEA 197, a measure that allows individuals without a chauffer’s license to transport an RV to the dealership for sale, Wednesday (June 17) at the RV/MH Hall of Fame and Museum in Elkhart, Ind.

Flanked by families visiting from Michigan and Ontario as well as a large contingent of representatives from the RV industry, the signing was purely ceremonial. Pence had already signed the legislation at the end of April and it went into effect immediately.

Still, Pence took the opportunity to applaud the RV industry and tout the virtues of the legislation, which he credited Sen. Carlin Yoder, R-Middlebury, Rep. Wes Culver, R-District 49, and Rep. Douglas Miller, R-District 48, with having ushered through both state houses.

Previously, Indiana residents transporting RVs were required to have a chauffer’s license for loads rated at more than 16,000 pounds gross combined vehicle weight rating. Now, drivers must still comply with federal commercial driver’s license requirements but the additional state regulation has been eliminated. The legislation provides an exemption that applies to RV’s being moved prior to its first retail sale, which would include both manufacturer-to-dealer and dealer-to show types of movement. 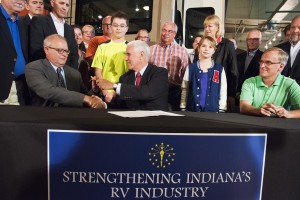 “We try and make sure that whenever possible government policy can conform to practices in the marketplace and that’s really what this common sense legislation accomplished — saving costs and red tape for people in this industry, and making it more possible for this dynamic industry to continue to see the growth that we’ve seen in recent years with this one small, but important, legislative change,” Pence told the audience of RV officials, media and museum visitors.

“This is one less step — one less rule and regulation — that our drivers will have to go through, so it will make it easier for individuals to get into the seat to deliver RVs to the dealers,” Hooley said after the signing. “Purchasers of the RV aren’t going to need a chauffer’s license, and now neither will the transport drivers. These guys have a lot of experience so there’s no need for them to have to have one.”

Prior to the signing, Pence was given a guided tour of his first-ever trip to the museum by Darryl Searer, president of the Hall of Fame, and then met with the RV officials for about one hour before he was introduced to the audience by Mark Bowersox, executive director of the Recreation Vehicle Indiana Council (RVIC), the state association that champions the RV industry.