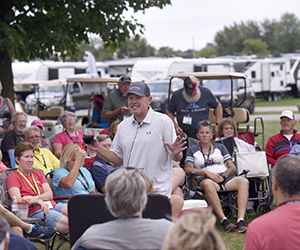 The 6th Annual Grand Design Owners Group attracted a record crowd to its annual Indiana Owners Rally August 27-30 at the Elkhart County 4-H Fairgrounds in Goshen, Ind. Grand Design President Don Clark reported that around a thousand owners and 471 units were in attendance at this year’s gathering.

“It’s the biggest rally ever,” he said. “All of our brands are represented here: Refection, Solitude, Momentum, Imagine and Transcend.”

Along with the rest of the festivities underway at the fairgrounds, mobile repair crews worked throughout the rally to take care of service work as a gesture to owners in attendance.

“Tonight, we’ve got a big hog roast with two pigs as part of the dinner we are sponsoring for all the owners,” Clark told RVBusiness.com last night (Aug. 29). “We will continue to have our fireside chats with owners. That has become a favorite with the club. They just sit around a nice fire with me and we are there to answer whatever questions they may have about the products and the company. Some are business related questions. Some are personal, but it’s just a great opportunity for us to get to know each other better.” 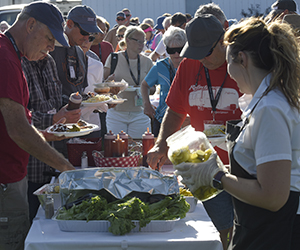 He added that tonight’s farewell dinner will conclude this year’s event, a consumer get-together that in Clark’s view was extremely well-organized by the club. “As far as I can tell our rally members are just having a blast,” said Clark, adding that a consumer-friendly culture has been a primary key to Grand Design’s success since its inception. “It’s one of the reasons we founded this company.

As an example of the company’s ownership loyalty, he shared that the rally itself is not a company-sponsored event but rather an owner-sponsored and organized event.

“They could have the big annual event anywhere in North America to hold this rally, but they always choose Elkhart County as the site,” he said. “They want to have this personal contact and relationship here with our team members and they want the Grand Design facility tours. These folks are really dyed-in-the-wool Grand Design fans and I feel privileged to witness this as something magical happens here. It creates a closer bond between our team members and the customer.”

Clark says his staff, from manufacturing group leaders to plant managers and department heads, are encouraged to visit the rally. “I think having all our team members gather here instills a sense of responsibility,” he added. “They understand that we have to build the best products we possibly can because they see how much it effects the lifestyles of our customers gathered here.”

Clark said that as Grand Design closes in on producing its 100,000th RV in its sixth year in business, the owners’ group has expanded significantly as well.

“The owners club is getting huge,” he said. “It’s gone far beyond my expectations. And the rallies they have all around the country with the regional groups are sizable. Many get 200 to 300 rigs at those gatherings as well.”

“We want to have a positive effect on our owner’s lifestyle,” he concluded. “These rallies are just very healthy for our company and for our owners.”