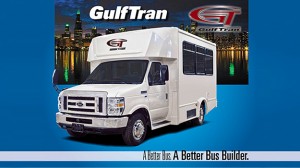 GulfTran LLC, a new company formed by the principles of RV manufacturer Gulf Stream Coach Inc., expects to market between 750 and 1,000 12- to 25-seat commercial shuttle buses annually beginning in November.

It’s all part of a new shirt on the part of the closely held, Nappanee, Ind.-based company outside of the tradtional recreational vehicle business.

In fact, the commercial shuttle bus arena is the second market outside the RV industry that Gulf Stream has ventured in to in recent months. The company also is part of a consortium formed by Electric Motors Corp. (EMC) to build hybrid pickup trucks. When EMC gets going, Gulf Stream will add EMC’s electric engine and drive train to Ford F-150 pickup trucks — perhaps as soon as the third quarter of 2010.

”We are loading the (shuttle bus) line now,” said Claude Donati, vice president of the new company who also is vice president of Gulf Stream’s motorized division. ”We know that commercial shuttle buses are a profitable and solid business. It’s a natural for us.”

”We’ll have two lines running under the same roof as the (Gulf Stream) motorhomes so we can keep our overhead low,” Donati said. ” There will be a lot of shared resources.”

Thirty to 60 employees — some of whom already are on-board — will focus on building GulfTran shuttle buses.

The coaches can be customized into as many as 50 floorplans, depending on the seating configuration, he said.

”Our minimum rate of production will be achieved in January,” Donati said.

GulfTran’s commercial shuttle buses will be built on Ford E-350 and E-450 chassis, Donati said, and are expected to be used in airports, schools, casinos and medical applications, among others.

Although initially the EMC project will not have a recreation vehicle application, Donati said that ”second-generation” EMC-equipped cutaway chassis eventually could be used to build Class C motorhomes.

Donati added, however, that despite Gulf Stream’s outside ventures, the company remains committed to building towable and motorized RVs.

“It may appear from the outside that we are in hibernation,” Donati said. ” But during that time we were cutting our costs and eliminating some of the overhead. Our goal is to be a major player in the motorhome business like we were five years ago, but we want to sustain growth first.”

On Tuesday (Oct. 27), Gulf Stream announced that it was recalling 50 laid off production workers and was expected to increase its motorhome production by 25% by the first of the year.