By: RVBusiness|Published on: May 18, 2018|Categories: Today’s Industry News| 0 comments 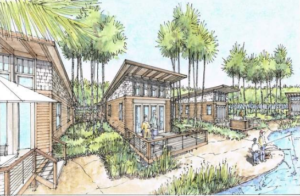 A year ago, Guy Harvey Outpost Resorts announced plans for its first-ever RV park, near Tarpon Springs, Fla., where the Anclote River empties into the Gulf of Mexico.

The $35 million resort, named after the popular Jamaican marine artist and conservationist, would include lots starting at $150,000 and cottages at $250,000.

But the Guy Harvey organization is no longer involved with the project, according to the Tampa Bay Times. It accused its former partner, Elite Resorts, of acting in bad faith and demanded it “destroy all materials in circulation” that include any Guy Harvey trademarks.

Nonetheless, Elite Resorts is proceeding with plans for the park — now called Anclote River Resort by TradeWinds — even though a piece of the 67-acre site could be sold to satisfy a Bahamian bank’s $405,693 judgment against an Elite-related company. And the head of Elite Resorts, Eduard Mayer, has a $1.8 million judgment against him personally from the same bank.

“I was told that the project was going to keep moving forward,” said Pasco County Commissioner Kathryn Starkey, whose district includes the site just north of the Pinellas-Pasco county line. “There were some business dealings that were getting cleaned up or worked through. We don’t get into that; it’s a private developer on a project.”