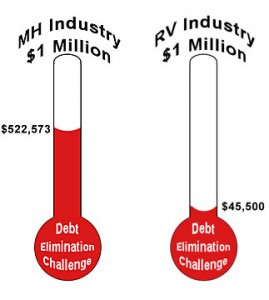 The RV/MH Heritage Foundation announced the final phase of its $1 Million RV Industry Debt Elimination campaign that launched last September. According to a press release, the campaign has generated over $500,000 in pledges and donations so far from members of the manufactured housing community.

The Kevin Clayton Debt Elimination Challenge campaign was launched when Kevin Clayton, CEO of Clayton Homes Inc., pledged $200,000 to help the RV/MH Hall of Fame become debt free in five years. He challenged other large and small companies, as well as individuals, in the manufactured housing industry to step up and help raise a total of $1 million.

Now, Clayton has issued a challenge to the RV industry to match the MH industry’s $1 million commitment; so the race is on to see which industry can reach that $1 million goal first. However, the MH has taken a substantial lead.

The prize for either industry reaching the $1 million goal first is a modified Ice Bucket Challenge.  Representatives from the winning industry will have the privilege of dumping buckets of ice on foundation President Darryl Searer.

Searer said, “Just the thought of it runs shivers up my spine, but it’s for a good cause and will be worth it to finally see the foundation debt free.”

The foundation reported that the RV industry drive has kicked off with generous donations from Peter and Beverly Orthwein ($25,000), the Family Motor Coach Association ($10,000), and Jayco Inc. ($10,000), along with a few smaller donations ($500).

“Like the Kevin Clayton Debt Elimination Challenge,” Searer said, “the RV Industry Debt Elimination is soliciting pledges and donations over the next five years.  These two campaigns will make the Foundation debt free by 2019, a day we are looking forward to celebrating.”

Searer urged members and companies in the two industries to show their support of the Foundation, which is dedicated to preserving and promoting the RV and MH industries, by entering their pledges or make a donation now to help the Foundation to meet its goal.

In the meantime, Judy Jankowski, the Hall’s vice president of development, is contacting leaders in both the RV and MH industries asking for their support of these campaigns.

Jankowski said, “As an addition incentive, all donations to the Debt Elimination Challenge are tax deductible.”

Pledges and donations can also be submitted by mail to: