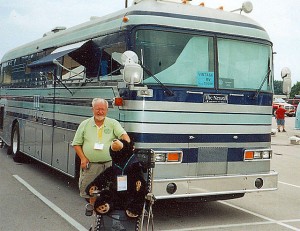 Al Hesselbart, who served the RV/MH Hall of Fame & Museum for 20 years, announced that he is retiring at the end of the month. Hesselbart is well known as an RV/MH historian, librarian, lecturer and author.

“I’ve always dreamed of having the independence and freedom to do what I want to do, when I want to do it,” Hesselbart stated in a press release.

Hesselbart started his career in the RV/MH industries in October of 1994 when Carl Ehry, then president of the RV/MH Heritage Foundation in Elkhart, Ind., recruited him as vice president and general manager. “Little did I know it at the time,” Hesselbart recalled, “but that turned out to be a life-changing experience.”

Hesselbart remembered that during those first few months the Foundation was nearly bankrupt, noting that when Ehry joined the Foundation a few months earlier, there was less than $2,000 in the bank. According to Hesselbart, the board told Ehry that if he expected to be paid, he’d have to raise money fast. Fortunately, Ehry was an excellent fundraiser, but that meant he spent most of his time traveling across the country soliciting donations while Hesselbart held the fort down in Elkhart.

For the first five years, he said he was a “one-man army” serving as museum manager, historian, bookkeeper, janitor, as well as Ehry’s secretary. “During this period I created and organized the library from a large collection of boxed books and magazines,” he said.

According to Hesselbart, Ehry had a vision of building a new grand facility to house the RV/MH Hall of Fame, museum, and a conference center with easy access off Interstates 80/90. “He started looking for available property and working with architects to design the facility,” Hesselbart said. “Then, in 1999 the decision was made to begin raising funds toward the new building, so I also became the bookkeeper/scorekeeper for the capital campaign.”

During those early years Hesselbart immersed himself in this history of the RV and manufactured housing industries by reading hundreds of books and magazines in the library that he was developing and by picking the brains of industry pioneers who visited the facility frequently, such as Hall of Fame members Jack Tuff, Harold Platt, Herb Reeves, Carl Edwards and Pete Callander.

By the late 1990s his reputation as an authority on the history of the RV and MH industries began to blossom, and he was frequently invited to speak at RV rallies and shows. He credits Hall of Fame member Dan Holt, editor-publisher of RV News (retired), as launching his career as an author.

“Dan invited me to write a monthly column on the heritage of the RV industry,” Hesselbart said. “Later, when I wrote my book, ‘The Dumb Things Sold…Just Like That,’ a history of the RV industry in America, the articles I wrote for RV News became the foundation of my book.” 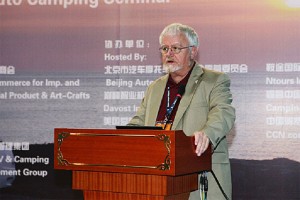 One of the highlights of Hesselbart’s career is when he was invited to speak in China in 2010, establishing him as an international authority on the RV industry in America. He was one of four U.S. representatives who participated in the 3rd Annual Hangzhou China Outdoor Lifestyle Show in support of the growing Chinese RV industry.

“This wasn’t just the highlight of my career, but the highlight of my life, Hesselbart said. “I was even more overwhelmed when I was invited back in 2012 to be one of the keynote speakers at the 1st National China RV Rally. I was tremendously honored to be invited to speak at this historic event.”

There have been a lot of changes in the RV/MH Heritage Foundation since he started 20 years ago. Hesselbart witnessed the transition from a nearly bankrupt organization in 1994 in the old facility to the financially sound, beautiful tourist attraction and event center that it is today.

As far as his future plans, Hesselbart said, “While I’m not looking for another career, I love sharing my knowledge about the history of the RV and manufactured housing industries with others so I will continue to accept invitations to speak at RV shows and rallies. Other than that, there are too many roads I haven’t traveled and a lot of fish that need catching so I’m going to get behind the wheel of my motorhome and see where the road takes me.”

Darryl Searer, president and chairman of the Foundation, said, “The board of directors and I thank Al for his many years of service to the Foundation. We’re confident that all his dreams will come true on whatever new roads he travels, and we wish him success in his new role as an independent RV historian.”

If you would like to congratulate Hesselbart on his retirement, email [email protected] or contact him through his web site www.rvhistoryprograms.com.