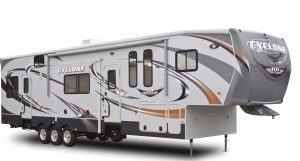 Heartland Recreational Vehicles LLC has expanded its Cyclone fifth-wheel toy hauler line with the Cyclone HD (Heartland Design) Edition, outfitted with several innovative upgrades and set off by the builder’s all-new high-gloss platinum fiberglass exterior, according to a news release. “Our Cyclone line, which was introduced four years ago, was ranked as the No. 12 selling fifth-wheel nationally in the latest Statistical Surveys report,” said Coley Brady, director of fifth-wheel sales for the Elkhart, Ind.-based manufacturer. “The new HD lineup continues to offer the same values and versatility that Heartland built into the Cyclone, but with some added pop, starting with the eye-catching platinum exterior.” The distinctive look, lending the Cyclone HD a full-body paint appearance without the cost, offers ease of maintenance and is complemented by a high-end graphics package. The fiberglass-and-aluminum toy hauler is offered in four floorplans ranging from 33 to 40 feet and available with double- or triple-slideouts. A key upgrade in the Cyclone HD is a residential-style garage equipped with a heat duct for extended season operation. The on-board garage, in lengths of 10 to 14 feet, also features a flush-mount sub-floor storage area, electric-powered beds that convert to seating and a removable table. For maximum exterior storage, Heartland introduces a 1-inch-thick, bus-style, slam-baggage door on the Cyclone HD. Other features include Dexter Axle’s EZ-Flex rubberized suspension system for an improved ride, along with optional hydraulic front landing gear that operates up to 14 times faster than electric and allows for a higher payload. On the interior, the kitchen is furnished with hand-rubbed, antique-glazed cherry kitchen cabinetry that features a mocha maple accent, while new spring-loaded, hidden hinges are used throughout the interior. The bathroom is outfitted with a vessel bowl sink and a high-rise, oil-rubbed, bronze residential custom faucet. Other appointments include a 32-inch Sharp Aquos HD TV in the living area, four-zone switchable interior speakers with two external speakers and a proprietary Country Rest memory foam, pillow top mattress. MSRP’s start at $61,999.