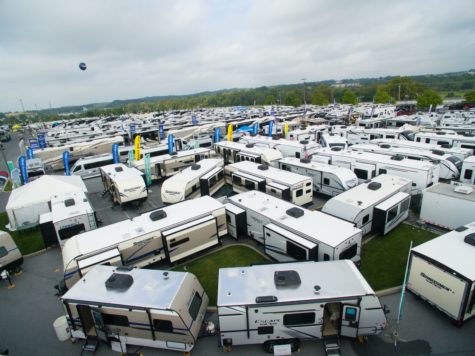 RVs covered the grounds at the Giant Center for Hershey Show

Although final attendance numbers weren’t available Monday (Sept. 16) in the wake of the Hershey Show — officially known as “America’s Largest RV Show” — the general consensus among the show’s exhibitors is that the 1,400-unit East Coast showcase served as a reminder to all facets of the RV industry that the retail pulse of the North American consumer is stronger than ever, given all the negative publicity that had surfaced over the past few months in the regional and national press.

“Our preliminary numbers on attendance are down a bit from last year when we had a little over 59,000 attendees come through the gates,” reported Heather Leach, executive director of the host Pennsylvania Recreational Vehicle and Camping Association (PRVCA). “We realize that there’s a little bit of concern with the media reporting that shipments have been down. But, I think overall the show kind of proved that there’s a lot of interest in buying RVs. So, we hope that helps us as the year moves forward to perhaps alleviate some of those concerns. Overall I think that everything went better than expected.”

Due in part to some steamy hot weather and dreary skies on Saturday morning, Leach is expecting that the final tally at Hershey, one of the nation’s top three consumer shows, will be about 4,000 less than last year, with a final gate total of about 55,000.

But again, based on what she’s hearing from the OEM exhibitors showing 2020 models in exhibits occupying more than a million square feet, sales at Hershey were exceedingly strong. And that’s what RVBUSINESS.com was hearing across the board from those who worked the show throughout the week. 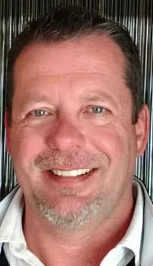 Thor Industries Inc. RV Group Manager Chris Hermon, who visited the show on Thursday, said he’s never seen consumers lined up like they were that morning outside the Giant Center.

“It was as far back into the main parking lot as I’ve ever seen in 20 years,” said Hermon. “It was crazy. Now the weather was a little steamy on Wednesday and Thursday. But when you walked around and talked to dealers, manufacturers and retail consumers, everybody was pretty happy with what they were seeing. So, overall, it was a pretty positive experience.”

Although Thor was still assembling sales figures from the show, Hermon was expecting that those totals would be close to 2018, which is a good thing given all of that’s occurred within the industry over the past year.

“Keeping in mind that I haven’t seen final numbers yet, high-end product was retailing really well. And I don’t mean any one brand,” said Hermon. “But among the top three to four guys out there — including several in the Thor family — that big, heavy iron, especially motorhomes, was moving well. Usually that’s a good sign in our industry with heavy iron at $200,000, $250,000 or $300,000 – gas or diesel – retailing that well for the rest of the price points in our industry.” 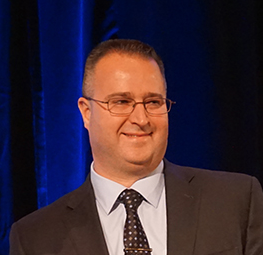 “We were up 10% over last year, and last year was good,” said Wilkins, “and we were happy with that. We certainly had to cope with some weather issues, including extreme 90-degree heat on Wednesday making it hard to slow people down in some cases. And then we had some rain on Saturday morning that I think slowed the start to Saturday a little bit. So, with those weather challenges and still coming out of it with a 10% increase, we’re pretty happy.

“I think it was a good sign that retail activity is still there, despite repeated headlines about how shipments are down,” noted Wilkins. “I think that there continues to be a wholesale inventory correction and that the retail activity is still pretty consistent with what we’ve seen. And with interest rates coming down and the stock market apparently stabilizing a little bit, hopefully it’s a good sign as we go into next year.”

Jayco Inc. Motorized Product Manager Pat Carroll, who worked the show for its duration, felt the interest level of the consumers was impressive. “It was incredible for our dealer that represented Entegra,” said Carroll. “Their motorized sales were up over where they were last year in a retail market that’s been slightly down, which is a very positive sign.

“Hershey’s always been a show where you not only make a lot of sales, but you also procure a lot of future sales as you educate consumers, especially on motorized units,” said Carroll, a motorized RV industry veteran who observed strong consumer demand among a pretty wide consumer demographic. “It was a good sign that, despite much of the press coverage about things slowing down in the economy, there still seems to be a very solid buying power out there with the consumers and it’s still going to be one of the top five years in the industry in retail sales.”

“For us, it was exceptional, and the same goes for most of the other manufacturers I talked to,” he told RVBUSINESS.com. “We had our best show in company history in terms of individual brand sales numbers, which were arguably the best we’ve ever had with a lot of the bigger towable stuff we were selling. Traffic was excellent. In fact, we were maxed out. We literally couldn’t have done any more with the sales staff we had on hand. We were like tapped.”

Goldenberg said consumers from as far as New York, New Jersey, Ohio, Pennsylvania and Delaware – converged with intentions to buy in many cases. “You know, it was great,” he added. “We realize that the attendance numbers were down a little bit for the show, but it didn’t feel like it at all.”

Don Strollo, president and CEO of RV One Superstores: “We were on par with last year,” said Strollo, whose multistore dealership is now part of the growing RV Retailer LLC network. “We sold a large volume of diesel and high-end motorhomes and we were right on pace with last year with very strong traffic. And the credit was good on the consumer side. Down payments were strong. Traffic was strong. Customers were out in full force, and there didn’t seem to be much, if any, concern from our consumer base regarding the future of the economy.

“It was a great signal for the industry,” he maintained. “Let’s face it. Hershey, the Tampa SuperShow and Pomona (now Fontana) are very significant bellwethers for our industry and I came away from Hershey with a very positive outlook for the next six to 12 months.”

Mark Meyer, president of Meyer’s RV Superstores, which will soon include seven locations: “I don’t have actual numbers yet, but it’s looking like we were up double digits in sales over last year,” reported Meyers. “Every display seemed to come alive. I think the towable business is very robust, and the motorized business is very competitive.

“The attendance seemed to be OK and, even though we’re hearing that the attendance was down a bit, it didn’t seem to affect anything. There were plenty of buyers. We didn’t hear any moans and groans about the economy, interest rates or any of that. It was strictly consumers looking for competitive pricing and for dealers who can service their potential purchases.”