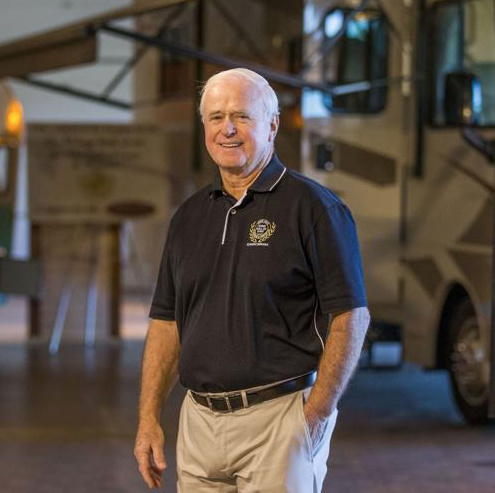 Editor’s Note: The following report by the South Bend Tribune profiles Darryl Searer’s lengthy career including his current status as president of the RV/MH Hall of Fame. The Hall is readying for its induction dinner on Aug. 5.

Darryl Searer traces his involvement in the RV business to the eighth grade, when he started building ventilation covers with his father in the basement of his childhood home in 1958.

With those kinds of roots, it was little wonder that industry leaders called on Searer in 2012 to help steer the RV/Manufactured Home Hall of Fame in Elkhart away from a financial chasm opened by the Recession.

Searer agreed to lead the Hall for one year; he’s now well into his seventh.

Now 76, Searer reflected recently on his tenure at the Hall, a lifetime in the business that he loves, and the future of an industry that is crucial to Michiana’s economy.

How would you describe your role at the Hall of Fame?
“I’ve been a volunteer. I take no money, no compensation from the Hall of Fame. It’s giving back to an industry that’s been very good to myself and my family.”

What part of your tenure as president brings you the most pride?
“I was in retirement for let’s say 22 years, but the last seven years I’ve been volunteering here at the Hall of Fame. And if we go back to March of 2012, the Hall of Fame had a debt of $5.5 million; and nothing had been paid down in the five years before that to reduce that debt. So the board of directors made a change, and the past president left, and I volunteered to come in for one year to help get them on the right road to recovery financially.

Talk about your staff at the Hall.
“We have a very small staff here — I only have two full-time, salaried staff; and then I have eight part-time people that help out. It’s a lean machine, but it’s well-oiled and it does a good job.”