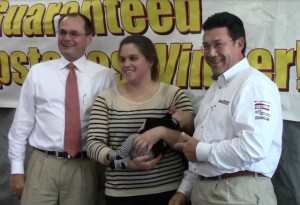 Five days before Christmas, Cayla Fair, her infant daughter, Sienna Marie, and her father left McAllen, Texas, in the early morning hours, and headed for Holiday World of Katy to take possession of a 2013 Fireside RV won by Fair in a contest sponsored by Holiday World.

The Katy Times reported that upon their arrival, the three visitors were ushered inside, where they were met by owner Michael Peay, Vice President of Sales Charlie Power and numerous other Holiday World employees.

As the group sat in the hospitality room, the 2013 Fireside RV Fair won was a short distance away, covered in a gray tarp festooned with red bows.

Fair, who had given birth to Sienna Marie on Nov. 21, still seemed a bit dazzled by it all. She had entered the sweepstakes contest on a whim, not thinking for a second that she might win.

”I saw it online and thought to myself, ‘it would be so nice to win an RV.’ But really, after I entered,  I didn’t give it another thought,” she said.

Holiday World received more than 7,000 entries for the contest, said Power. ”We thought it would be a great way to help make someone’s dream come true, as well as publicize our business,” he said.

Fair’s name was picked at random in a computer drawing, Power explained.

On Dec. 14, Power left Fair a voice message and e-mail, leaving his name, company name and stating that she was entered in the sweepstakes and that he would like to speak with her.

By the time Monday came around, Power realized he hadn’t heard back from Fair, so her found her on Facebook and left the same message. At the same time, Power noticed Fair’s “Family” tab so he contacted her brother, who promotes his business on Facebook.

He called the brother’s number and Fair’s sister-in-law answered.

“I explained to her why it was so important that I get in touch with her,” said Power. “She then called Cayla and gave her my number to call me.”

Fair dialed Power’s number, but she had no idea what she was calling about.

”So it was a really big surprise when I told her she had won,” said Power. “At first, she thought it was a joke from a radio station or even something her family or friends were involved in.”

“I thought somebody was pranking me,” added Fair. “But after talking more [with Power], I realized it was for real. I couldn’t believe it. I’m so grateful.”