By: RVBusiness|Published on: May 21, 2018|Categories: Today’s Industry News| 0 comments 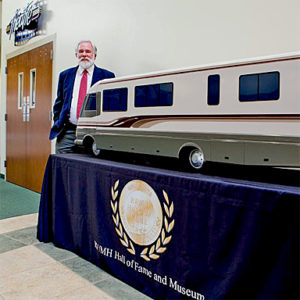 Bruce A. Hopkins, vice president of standards and education for the RV Industry Association (RVIA), recently donated a scale model of a 1993 Pace Arrow by Fleetwood Enterprises to the RV/MH Hall of Fame and Museum. The model is on display outside the Younkin Theater on the first floor.

Darryl Searer, president of the RV/MH Heritage Foundation (Foundation), noted in a press release, “This beautiful model gives museum visitors a rare look at the detail that RV manufacturers go through prior to actually manufacturing a new model.”

The model measurers approximately 19 inches wide, 20 inches tall and about 80 inches long and has two different graphic schemes on either side. It was produced by Fleetwood for about $10,000 and, according to Hopkins, the model was used in photography for brochures and literature.

He said, “Several years ago, I was given a tour of Fleetwood Enterprises by former president Elden Smith. During that tour, we went into a warehouse that had little inside except for ten RV motorhome models, all under their own canvas covers. We looked at one and it was amazing.

“Sometime later I called Fleetwood engineer Bob Woznick, who I had worked with on standards issues, and asked him what Fleetwood did with these models. He said they were given away or otherwise disposed of. I asked him if they would they give or sell me one. Bob later called to say I could have one at no cost, but I’d have to pay to have it boxed and shipped. I agreed immediately.”

Searer pointed out that this was not the only model that Hopkins had donated to the museum. Earlier, Hopkins donated a scale model of Coachmen’s Sportscoach motorhome, which is on display in the Foundation’s library. 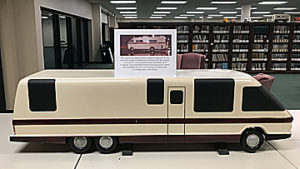 It was one of the designs Coachmen was looking at for the redesign of the Sportscoach motorhome they purchased out of California. That motorhome had the reversed eyebrow above the windshield and this was the design of what would eventually replace that design.

Hopkins said, “I got this model from Evan Mether, the NRVTI instructor at Elkhart Institute of Technology.  When Evan retired from teaching. I had always admired it and Evan gave it to me when he retired.”

Searer said, “The Foundation appreciates Bruce’s generosity and thoughtfulness by these donations.  We also encourage other RV and manufactured housing companies to consider donations to the Foundation before disposing of historic documents and paraphernalia associated with their histories.”