Magazine editors and writers from across the country were invited to Husky’s ‘Towing Tech ’12’ program at the company’s R&D facility in Elkhart, Ind.

Husky Towing Products, a division of Morgan Hill, Calif.-based COAST Distribution System Inc., hosted its first editorial conference Wednesday (June 13), bringing together magazine editors and writers from around the country to the company’s expansive R & D Center in Elkhart, Ind., for an intensive one-day workshop with Husky executives and engineers.

“We are considering continuing this conference on an annual basis,” said Steve Holt, director of brand and corporate marketing for Coast. “Whether we do the same thing next year isn’t certain, but we definitely want to expand on this relationship with the editorial community.”

The “Towing Tech ’12” program provided an overview of Husky towing products — including its weight-distribution and fifth-wheel hitches, brake controls and assemblies and RV power jacks — followed by a tour of the R&D facility. Also on the agenda were hands-on demonstrations of Husky’s Center Line weight-distribution and sway control system and an installation of the company’s new Husky 10 fifth-wheel hitch base assembly. 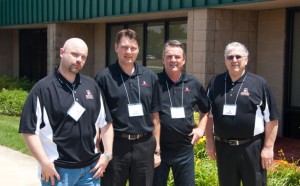 Scheduled for release in July, the Husky 10 slider assembly replaces traditional rollers with innovate composite-design nylon pads to provide the hitch base 10 inches of travel, allowing use of short-bed pickups when towing fifth-wheel trailers. Designed to be used with Husky 16K and 26K fifth-wheel hitches, the Husky 10 also incorporates a patent-pending “no bind” latching mechanism that eliminates tension on the handle, allowing the flip lever to release and automatically lock in the next position.

Attendees also toured the Technical Center, including an overview of the company’s salt/fog testing equipment, and witnessed failure-testing of a Husky 26K fifth-wheel hitch.

Following the day-long event, Husky arranged for a dinner at the RV/MH Hall of Fame, followed by a private tour of the displays by Hall historian Al Hesselbart.