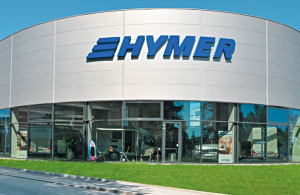 Europe’s largest RV builder, HYMER AG, is proceeding with plans to enter the U.S. recreational vehicle marketplace, based on the company’s own research and on the “awesome” reception its European-built products received last week in a test-marketing display at the Florida RV Trade Association’s (FRVTA) 2013 Florida RV SuperShow in Tampa.

Roel L.W. Nizet, CEO and chairman of HYMER Group’s executive board, confirmed the decision in an interview with RVBUSINESS.com on behalf of the German conglomerate, a $1.7 billion company with annual sales of 47,000 units that distributes its products throughout 28 countries.

Nizet was dividing his time last week between the Tampa Show exhibit and the 2nd World RV Conference, hosted by the Recreation Vehicle Industry Association (RVIA) in downtown Tampa.

HYMER would become the first foreign — in this case European – manufacturer to bridge the gap to the States in a substantial way.

“It’s a very exciting deal for us,” says Nizet, whose company showed a handful of trailers in Tampa as well as Class A and B motorhomes, both of which were based on Fiat Ducato chassis, which Chrysler Group LLC reportedly plans on importing to the U.S. in the near future. “But it’s a necessity because, we (industry in general) are always talking about a global market. The RV industry should be a global market, and someone has to bridge it. So, we’re willing to be the first.”

HYMER currently builds 22,000 units a year in Europe on the Ducato.

While HYMER plans a gradual rollout of towable and motorized U.S. products – maybe two this year and two the next – the German firm is looking to finalize a joint venture manufacturing agreement with an American concern because the southern German company’s game plan does not include, with the exception of a few startup models, building inventory in Europe and shipping to the States.

So, joint venturing with a U.S. manufacturer is the only logical plan at this point for HYMER, which is headquartered in Bald Walsee with manufacturing currently located in nine German locations.

“Absolutely,” Nizet told RVBUSINESS.com. “We are not willing, let me say, to ship from Europe to America. Our intention is to make a sustainable business out of it. We simply want to be a local (U.S.) OEM with the quality level of Europe, of Germany. And we will stay in a niche, definitely. As I’ve mentioned previously, we want to be the iPhone with wheels – very innovative. And that’s our goal on a high level – not the cheapest, definitely. That’s our main goal.”

“So, after the show we will keep the vehicles for three quarters of a year in the states,” said Nizet. “We’ll make a tour and show them during various occasions, dealer meetings and other RVIA occasions and then finally after this period we will collect all the feedback. We will take a look at what we have to do and then we will decide which products we will start with to sell in the U.S. market.

“Based on the feedback from the people here (in Tampa), we’ve already decided to start with two, probably three models which we will adapt to the American market, meeting 110 voltage, and we will adjust the gas to the American standard and we will ship over a couple of them so that we keep things moving so that we don’t have a (time) gap, let’s say, between this show and the expectations we have heard from the people coming here.”