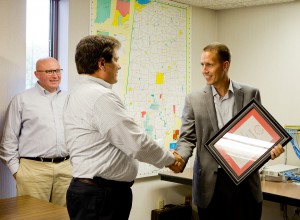 Matt Rose, Director of Recreation Vehicles and Ken Eckstein, president of the IMHA-RVIC board present Mark Bowersox with certificate of service (Photo by Shawn Spence)

Mark Bowersox, whose last day as executive director of the Indiana Manufactured Housing Association-Recreation Vehicle Indiana Council (IMHA-RVIC) is Friday (Sept. 4), was honored with a farewell reception last night by the Indianapolis-based organization.

“It was very nice, a lot of fun and it was very gracious of people to come see me off,” Bowersox told RVBUSINESS.com.

Bowersox began as the association’s RV director before adding marketing director duties. He has served as the IMHA-RVIC executive director since Jan. 1, 2010. He is leaving IMHA-RVIC to take a position with the Manufactured Housing Institute.

“The association business in general is a relationship business and a personal business so it was nice to see a lot of faces that I’ve known for 10 or 12 years come back and say, ‘Thank you’ and ‘Congratulations’ to me — and give me a hard time, which I have done for the last 10 or 12 years, too,” he said.

Matt Rose, director of recreation vehicles at the IMHA-RVIC, said it was a “spectacular reception.”

“We probably had close to 30 people come in and out over the course of the two-hour reception, with many driving in from all over the state. And we probably had two or three times that many people who called and said that, although they couldn’t make it to the reception, they wanted to congratulate him and wish him well,” Rose said. “The bottom line is, Mark is not only a great guy but he’s great at what he does, and that’s what made him so successful.”

IMHA-RVIC President Ken Eckstein said he and everyone at the association wishes Bowersox only the best as he moves on in his career. 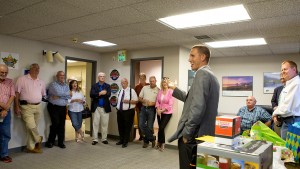 “He came on 12 years ago green and wet behind the ears, and he’s leaving us as the elder statesman. The association has grown with him through very, very hard times,” Eckstein told RVBUSINESS.com. “He’s been there 12 years and he’s done a great job. He came in as the RV guy and he left as a legislator. It’s pretty impressive when you look at what he’s brought to the association as far as raising the profile of what we do and who we are.”

Eckstein, who is owner and chief operating officer of Mount Comfort RV in Greenfield, Ind., said the search for Bowersox’s successor is moving along and a new executive director could be announced as early as Sept. 18.

“We’ve had a lot of qualified applicants. The search committee has narrowed it down to a final three that we’re going to be bringing in for interviews, and we hope to announce a new director by Sept. 18 if all goes well, but certainly by the end of the month,” Eckstein said, adding that Bowersox has pledged his support to help ensure a smooth transition for the new person.