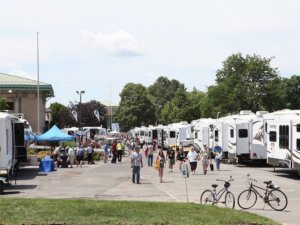 Adopting a revamped format intended to tap into a broader consumer base, Good Sam Enterprises LLC rolled out its inaugural Good Sam Super Show Feb. 23-26 at the Phoenix International Raceway.

“The show definitely surpassed expectations,” reported Vilma Fraguada, president of Good Sam consumer shows. “We’re still tabulating the final count, but we are estimating total attendance to be around 18,500. We saw an increase in people who used our camping site and also in our day traffic, which was really encouraging. Our team did a great job and by all accounts the show was very well received.

“Without a doubt, we established a blueprint for future Good Sam events,” she added, noting that Super Shows were already finalized for July 13-16 at the Washington Fairgrounds in Pullayup and at the Georgia International Horse Park in Conyers in November. “Based on the success in Phoenix we already have registrations for the next Super Show. There was some uncertainty going in just because it was new, but everyone was very pleased. Of course, we will continue to improve and revise some things, but we couldn’t have hoped for a better start.”

The event marked a departure for the organization as Fraguada and the Good Sam team incorporated “many of the elements of past national rallies” with an expanded format that included more youth activities, educational seminars and entertainment.

“I think we accomplished our goal of bringing in new people to make it more of a multigenerational consumer show,”  Fraguada told RVBUSINESS.com. “We were also able to show nonmembers what a great association the Good Sam Club is, and what we have to offer. Just as important, our members were excited about the new format. I think they enjoyed being part of a larger RV community, which was missing from our national rallies.” 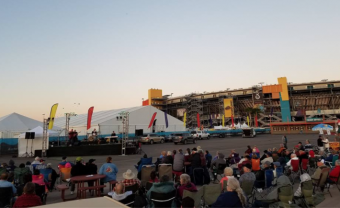 A key piece of the new model is a heightened focus on public relations and advertising, as Good Sam heavily promoted the event through local and regional media. “Our media effort definitely paid off,” said Fraguada. “We received a lot of exposure and it seemed like everybody I talked to had seen or heard advertising for the show. We’re getting ready to start promoting our show in Washington, so it’s an ongoing process.”

In tandem with the promotional push, Good Sam also focused on “creating more of a local element,” according to Fraguada. “We had a lot of activities that tied into the community, including booking local talent for our nightly entertainment,” she said. “One of the best things we did was host a Good Sam BBQ Showdown which qualified as part of the Barbecue Championship Series. That’s the type of thing that we’re going to increase at future shows.”

Fraguera stressed that in addition to show attendees, the lineup of vendors, manufacturers and dealers also passed on good reports. “I don’t have a count on the number of units sold, but throughout weekend I was talking to dealers working the show and they said it was a strong selling environment,” she said. “A lot of them wanted to double their space for next year, which means the show paid off for them.

“Our goal is to make everybody happy — consumers, OEMs and dealers, and most importantly our members. We work very closely with them and we’ll be following up with members to get their input — find out what they liked and what they would like to see at future shows. It’s a work in progress, but we’re very pleased with what we saw in Phoenix.”