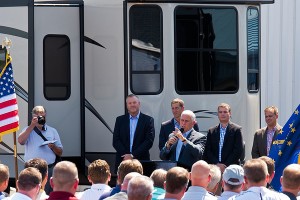 Editor’s Note: To view an accompanying video from WSBT TV scroll to the right side of the RVBUSINESS.com home page.

In brief preliminary remarks, Pence recognized Elkhart County as the place where more than 85% of North America’s RV wholesale shipments currently originate and he congratulated the many Keystone production workers in the audience for their hard work and perseverance in helping make the new 119,900-square-foot “Mega Plant” possible.

The $5 million plant south of Goshen, already in its initial startup phase, will employ 250 workers, 150 of whom will fill new jobs.

“I think we all remember 2009,” said Pence, standing at a podium in front of several destination-style RVs, which, along with entry-level travel trailers, will be the main products manufactured at the new facility. “We all remember those dark days of 20% unemployment, and to see the growth and prosperity that’s come back to this region is a testimony to the character, the determination and the faith of a community that would not stand idly by and demanded that the best is yet to come in this industry, for this community, and for this state. So, congratulations to you all.” 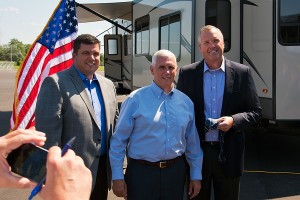 Pence, who spoke earlier in the day at a Greater Elkhart Chamber of Commerce luncheon at the Lerner Theatre in downtown Elkhart, also addressed the pivotal role that Keystone parent Thor Industries Inc. and its 12 divisions have played in the general resurgence of the Elkhart-area economy – an upsurge so consistent in RV manufacturing and other business categories that it’s been taxing companies’ abilities to locate and train work-ready new employees.

“I think that the story of Thor Industries and Keystone RV is a great American success story,” added Pence. “In less than two decades, we’ve seen the growth and investment through some very difficult times. And the sheer magnitude of this mega-facility, the potential that it will draw more investment into the region, can not be overstated. It’s just a great day for Goshen, it’s a great day for the RV industry and a great day for Indiana.”

Keystone President Matt Zimmerman, standing next to Thor President and CEO Bob Martin, addressed the growth that Keystone, Thor’s largest subsidiary, has experienced in recent years that is reflected in the new facility – the Goshen-based company’s 20th plant in Elkhart County, 25th overall and its largest to date.

“Demand for Keystone products is stronger than ever before,” said Zimmerman in his remarks at the podium, noting that his company now operates out of 2.8 million square feet of floor space occupying some 437 acres. “And it’s this demand that truly has our company setting all-time records – records for not only units produced yearly, but infrastructure records. With the additional jobs created from this plant, we (Keystone) will employ now over 4,700 employees of which 4,000 are right here in the great state of Indiana.

“The key ingredient to our success is our exceptional people — the best in the industry,” added Zimmerman, “and I would congratulate you on another great accomplishment.”