By: RVBusiness|Published on: May 13, 2015|Categories: Today’s Industry News| 0 comments 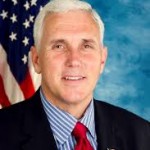 Indiana Gov. Mike Pence spent Tuesday (May 12) in Beijing meeting with high-level Chinese government officials and promoting Indiana-made recreational vehicles at a reception attended by more than 100 business officials at the U.S. Embassy.

“Northern Indiana is the epicenter of the RV industry. That becomes apparent when you travel all the way to China and find Hoosier-built RVs on the road,” said Pence. “Thousands of Hoosiers are building RVs that are then sold globally, including in China. And with the current popularity of RVs in China, tonight was a great opportunity to discuss how more Chinese people can fully enjoy the open road and the great outdoors with an Indiana-made vehicle.”

The reception, co-hosted with the Recreational Vehicle Industry Association (RVIA), showcased three Indiana-made RVs and highlighted the great potential China holds for both domestic and American RV manufacturers. China is the second largest market in the world for U.S. RV exports, with Chinese consumers spending $68 million on U.S.-built RVs in the last two years. In his remarks, the governor highlighted that almost 85% of the 350,000 RVs shipped just last year were built in Indiana as part of an industry that employs nearly 300,000 Hoosiers.