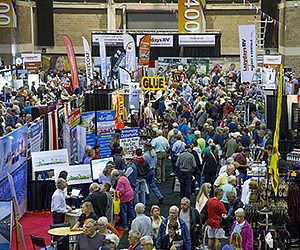 While yesterday (Jan. 17) was noteworthy in that the opening day of the Florida RV SuperShow, the annual industry event in Tampa, Fla., was marked by shoulder-to-shoulder crowds throughout most of the day, the buzz among the manufacturers, suppliers and dealers working the show was the news that morning that the National RV Trade Show in Louisville, Ky., was to be replaced with a “completely new” event set to take place in early 2019. (To view a slideshow highlighting the show click here. Photos by Shawn Spence).

Commenting on the traffic at the Tampa Show, Newmar Corp. Vice President of Sales and Marketing John Sammut noted, “Well, since 9 o’clock this morning, what you see in the display right now is exactly what we’ve had – wall-to-wall people. I think it has got to be a record for a first day, because as you look up and down the main aisle here, it looks like a Saturday, not a Wednesday.

“For a first day, I’ve got to imagine the FRVTA has got to be elated with the turnout. But not only quantity of traffic, but the quality of traffic we’re seeing here. People are really engaged, asking very good questions toward their buying decision and making their decisions on what they’re going to purchase in a new motorhome. It’s really encouraging to see for the first day of Tampa.”

But while sales appeared strong, industry representatives were still focused on the ramifications from the decision announced that morning by the Recreation Vehicle Industry Association (RVIA). On Tuesday (Jan. 16) RVIA’s board of directors unanimously approved the monumental recommendation proposed by its Show and Events Committee. The “Louisville Show” had been an industry staple for 54 years, but officials said its declining value for stakeholders in the wake of the Elkhart RV Open House ultimately rendered it expendable.

In its place will be a new business-to-business event designed to “generate a high level of notoriety for the industry among consumers,” according to RVIA. Although a number of details are to be determined, Show and Events Committee Chairman Troy James, president of Thor Industries Inc. subsidiary Dutchmen RV, told RVBUSINESS.com the new springtime event will be an opportunity “for the entire industry to promote within ourselves, from OEMs to dealers, from suppliers to manufacturers.

“Also, this is going to be a consumer-facing event to help propel us forward as we move into the next 10, 20 years,” James said. “The reality is, it’s time to propel this industry forward and to get more of that consumer-facing event out there, not a retail event for people to come in and buy product, but to promote the industry, both within and outside; internal and external customers.”

A number of other industry officials also spoke with RVBUSINESS.com regarding the decision that “a completely new approach was needed for the industry’s national event.” 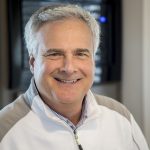 • Dick Grymonprez, director of park model sales for Champion/Athens Park Homes and an RVIA board member, said he is “excited” with the prospects of the new event.

“I think the whole board was excited about the presentation that was put on by the committee, in that we think it’s so positive for our industry to be able to show innovation and training and give out some awards.

“We realize there wasn’t room or need for two buying shows. Definitely, the Elkhart RV Open House is not going away – that’s the buying show. Our new show will be about the innovation and everything else that’s going to grow our industry in the future. I think, as a board, we’re totally excited about it and think we have something that’s going to be a huge success in 2019.

“We’ve got the direction to move forward, so now we’ve got to find a venue in a great location where we’re going to just make it a big celebration for our industry to show the future of the RV industry.”

• Attending the Tampa Show while vacationing in Florida was Ron Kinsey of Modern Trailer Sales in Anderson, Ind., who said although the Louisville Show was convenient for his dealership due to its proximity, he wasn’t surprised to hear of its cancelation.

“And I’m not sure I’m going to miss it a bit,” he added. “It served its purpose and with the Open House in the fall, it wasn’t something we needed any longer.”

• RVIA board member Matt Miller, president of Newmar Corp., echoed those sentiments, saying Louisville was a “dying” show because its purpose had been supplanted by Open House. But the new show will be “phenomenal,” he said, and given its spring timing and focus on innovative products it’s poised to capture the attention of national media and the public right before the start of camping season.

“I think it’s awesome. I think we’ll look back on this board vote someday, and it’ll be seen as the most consequential – in a positive way – board vote probably in at least the last 10 years,” Miller said. “This (new) show and their vision for this show, it’s phenomenal. I can’t wait. I really can’t wait.”

Speaking from a busy Newmar display at the Tampa Show, he added that there was no desire by anyone to replace the Louisville Show with another buyer-focused show. He expects the new show will focus on service tech training, education and innovation, and that the show would “drive attention to the industry, right at a time when we can really make a difference.”

Miller added, “There will be some growing pains. I know the first couple of years there may be conflicts with OEMs, if they have a dealer meeting. The first one or two years, there could be some growing pains. It’s not going to be perfect the first year. I don’t expect perfection the first year. I think three years from now we’re going to look back and say, ‘Why in the world did it take us until 2018 to get this done? This should have happened five, six years ago.’” 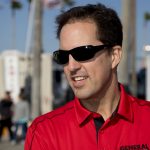 “Dealers a number of years ago felt like Louisville was becoming less and less important, and there were less and less things being accomplished in Louisville. And I think you saw attendance continue to decline. So I think it was years in the making to get to this point, and I’m glad that the people that decide these things made a really good decision,” Baidas said, adding that Open House has taken on an even greater significance as a buyer show.

“Open House became significantly bigger for the time we spent and the things that we accomplished to set up a preview of next year. And it will become even more important as we go forward without Louisville. So whether we expand that or spend more time there, or whatever it is, it’s going to be now an integral part of what the RV industry is,” he said.

• Michael Happe, president of Winnebago Industries Inc. and another RVIA board member, thought the new show represented the “beginning of a new tradition for the RV industry as a whole.”

“The RV industry has grown into a major business in the U.S. economy, in almost $50 billion in direct and indirect economic impact,” Happe continued. “If the industry aspires to be something even bigger than that, if we want to turn $50 billion into $100 billion some day, then the industry will have to continue to evolve in many ways. The trade show that the RVIA leads on behalf of the industry is one of those vehicles that has to evolve as well.”

Happe noted that the canceling of the 2018 Louisville Show provides RVIA staff and certain members the time and attention to focus on developing the new show.

“I think the concept that was initially presented to the board delivered a message that the show could be rethought and repurposed, and that it was an inflection point for us to think about new ways of improving the industry together, getting the right stakeholders in the room in a more meaningful way for a period of time, and that there’s potentially now an opportunity for some out-of-the-box thinking to occur, as opposed to maybe, incremental thinking,” he said.

“None of these changes are without risk,” he pointed out, “and certainly you’ll blend some of what has always worked about Louisville, but you now have an opportunity to step back and redefine the purpose of the industry getting together in a way that complements the other events that will likely remain on the calendar: Open House, probably the RVDA event, and some of the other manufacturer events that they host.

• The Florida RV Trade Association (FRVTA), host of the Florida RV SuperShow, and its president, Lance Wilson, were privy to a special viewing of the board presentation. Afterward he told RVBUSINESS.com he was “absolutely blown away.”

“It was very exciting – the most exciting thing I’ve seen in this industry in 25 years,” he said. “I wish I was 25 years younger.”

Like the others, he pointed out the growing stature of the Open House superseded the Louisville Show, so rather than prop it up any further officials are starting “a whole new process; it’s very detailed and attacks every part of the industry to raise it up much further than it ever has been before.”

“I was just blown away by it, and the forward thinking and the vision of the people at RVIA, with (RVIA President) Frank (Hugelmeyer) in the lead, just shows tremendous thought and ingenuity, far thinking … every one of those phrases you could put with it. I’m still a little bit staggered by it. Not because it doesn’t make sense, but because it makes perfect sense moving forward. It’s just very, very exciting and I can’t wait to be a part of it,” Wilson enthused.

He said the visionary presentation “not only passed the test, it just blew the test away because it goes after everything that we’ve been talking about and haven’t been able to generate.”

In conclusion, Wilson had a message to the rest of the RVIA membership and RV industry as whole: “Don’t be afraid. Don’t be afraid. This is going to move this industry forward. And it will elevate the industry as a whole. Change is absolutely overdue. Just wait. Get the information, process it, and don’t jump to conclusions, because it’s not the end. This is just the beginning.”