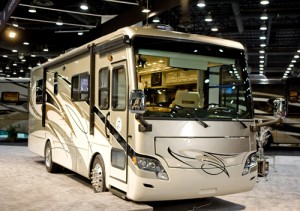 Recreational Vehicle manufacturers generally reported good sales, encouraging new dealer signups and overall optimism with regard to the market outlook for 2010, based on their experiences at RVIA’s 47th Annual National RV Trade Show, Dec. 1-3 at the Kentucky Exposition Center in Louisville, Ky. And that’s a pretty big switch from the outlook with which many of them returned from the 2008 Louisville Show.

Having said that, there still seems to be an element of restraint within the industry due to continued soft spots in the U.S. economy. And there’s still a sense among many who attended the most recent Louisville show that the motorized segment will require extra time to recover.

“We thought the show was very positive, much better than last year,” reported Richard Coon, president of the sponsoring Recreation Vehicle Industry Association (RVIA), a manufacturer-dominated trade association. “Most manufacturers have felt the increase in business since the first part of the summer, and business has continued to move upward.”

“The wholesale side started selling more in September than last year,” he added. “That continued into October and November. So people came to the show thinking and hoping for a better year, and continued on with a lot of buying.”

Final 2009 show attendance numbers of 8,323 were nearly the same as last year’s 8,427), which was “very good, considering how many dealers have gone out of business since last year,” said Coon. When all was said and done, there were 72 manufacturers and 210 supplier exhibitors at the show occupying 604,247 square feet of exhibit space, according to Mary “Mike” Hutya, vice president of meetings and shows for RVIA.

That compares to just over 800,000 square feet of space in 2008 and RVIA’s decision this year to cut back the show’s square footage at the Kentucky Exposition Center due to industry cutbacks amid the recent recessionary downturn.

“Dr. Curtin’s last three forecasts were way conservative – much lower than what actually turned out, and that could turn out to be the case again,” said Coon. “A lot depends on the jobs situation. That’s what it takes to get the bankers cranking. We need people to get back to work, stop defaulting on loans. And, if job losses continue to lessen, hopefully it will turn positive shortly, and Dr. Curtin may be too low on his forecasts again.”

Elkhart, Ind.-based Forest River Inc. had a record turn-out on all three nights it hosted dealers and others at its hospitality suite, including more than 1,300 people on Monday evening alone. “For the show being half the size of years past, the traffic on the showroom floor was also very good,” said Jeff Babcock, head of sales and marketing.

With dealers low on inventory, said Babcock, “the appetite for product was strong.” And so were new-dealer applications. “I wouldn’t be surprised if we had 100-150 (dealer) applications” from the show, Babcock noted, adding that “the first sales in January and February will probably dictate how the rest of 2010 goes.”

Keystone also signed new dealers for its all-new, higher end product lines, the Alpine and Avalanche, which, along with a new lightweight Premier by Bullet line, were “unbelievably well received.”

“We’re glad the dealers are still excited about the innovation and new products at Keystone,” said Martin, who said Keystone has been optimistic about the market’s upturn since late last spring when it first began bumping up production, resulting in the start-up of four additional production lines. “We had a very good summer season and look for 2010 to be definitely potentially stronger,” said Martin, anticipating further production increases.

“Dealers this year seem to have their floorplanning in line,” he added. “The major lending institutions show no signs of pulling in, as long as dealers are operating within the new parameters. It helps the business overall.”

Heartland Recreational Vehicles LLC, Elkhart, also regarded this year’s Louisville event as “an exceptionally good show,” according to President Brian Brady. “The response to all our products displayed was just terrific,” he said. “We wrote three times as many orders this year as last, and last year was a surprisingly good show for Heartland. But the opportunity to spend quality time with our customers at this show was equally important.

“By any objective measure, the climate has improved,” he added. “On the other hand, we were very explicit with our dealers, encouraging them to remain disciplined in the sense of responsible increases in their inventory levels. We want to see them continue to run a disciplined operation and focus on primary product points. In our view, 2010 is not the time for dealers to be looking at niche-type products” or getting into new areas of the market, Brady added.

Heartland has steadily increased production at all its plants in the second half of 2009, and had further hikes slated throughout January and February. He said Heartland only builds sold orders and that the towable-only firm has “the orders to support the production increases.” By the same token, he noted, Heartland will stay focused on the travel trailer segment, having rolled out a number of new travel trailers at Louisville. “Our travel trailer lineup is very robust, and we’re going to be relentless in growing that segment of the business,” Brady concluded.

In much the same vein, Jayco Inc., Middlebury, Ind., thinks the industry is on its way back, but that the recovery will be slower than it was in previous downturns, said President Derald Bontrager. “We had great (dealer) attendance” at the Louisville show, he said, “and dealer attitudes were very positive. They’re very optimistic about the future and placing orders.”

Jayco was not looking to add a lot of dealers for its Jayco brand, but signed a number of new dealers for its Starcraft and Integra Coach (Class A diesel) divisions. “We set targets for both brands and exceeded our targets,” said Bontrager.

Like others, Jayco has been gradually ramping up its production since summer and, “based on the show, it appears we’ll continue to increase output as we move toward spring.”

Roger Martin, vice president of sales and marketing for Winnebago Industries Inc., noted that, from a “dealer mood, interest and ordering standpoint,” this year’s show was “better than last year’s.” But considering how bad the 2008 show was for motorized manufacturers, he thinks it may be several years before that segment gets back to previous levels.

“Things are moving up,” said Martin, noting that dealer orders for his company’s products at Louisville increased 150% over a year ago. “But we’re (motorized segment) not anywhere near what we used to be. There’s still a lot of room before the (motorized) market gets back.” Meanwhile, he expected growth to be “slow and steady.”

For Monaco RV LLC, the successor to Monaco Coach Corp., Coburg, Ore., the 2009 show was “Our first chance to show off our new (Navistar) owners,” reported Mike Snell, vice president of sales and marketing. But even though Monaco displayed some Navistar commercial products and debuted its new Holiday Rambler Neptune and Monaco Cayman coaches, part of its central focus to a great extent right now is on growing its towable business.

“As everyone has been saying for the last several months, it’s a towable-dominated market,” said Snell. “Class A’s are not as strong. And it’s not to our advantage to put the majority of company resources behind them. We did sign some motorized dealers, but the majority of those we added were in towables. We’re now doing better in towables and growing towables and putting more resources behind them.”

By the same token, motorized RV builder Four Winds International, a Thor division in Elkhart, is still “optimistic” about the outlook for 2010. “We had a good show and good interest across the board on gas and diesel,” said Dana Simon, vice president of sales and marketing. “It wasn’t just specific brands or price points. We had good dealer reception, and fresh, new product out there. A benefit of being a division of Thor is that even these times it can still be aggressive putting a lot of R&D and design effort into new product lines.”