By: RVBusiness|Published on: May 14, 2015|Categories: Today’s Industry News| 0 comments 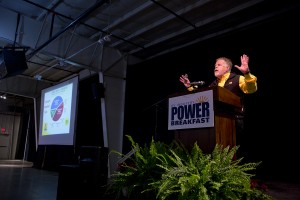 When the RV industry gathered this morning (May 14) in Elkhart, Ind. at the RV/MH Hall of Fame for the 3rd Annual Power Breakfast, a trio of speakers representing the manufacturing, finance and campground sectors helped illustrate just how far-reaching the optimism is surrounding the RV market’s future.

Gaeddert marveled at the fact that over the last year, the industry came together to solve RV transport backlog issues, reducing turnaround times that stood at six to 12 weeks a year ago to less than a week. “The result, as everyone is aware, has been a total turnaround in spite of double-digit growth,” he said.

Gaeddert, immediate past chairman of the Recreation Vehicle Industry Association (RVIA), highlighted help from lawmakers over the last year while stressing the overall sense of camaraderie in the industry. “While everyone’s out to kick each other’s butts in the marketplace, they’re also good at selflessly coming together for the common good,” he said. “As an industry, we’re all on a roll. The question is, what can we all do to sustain and improve it even more?”

From the finance side, Tim Hyland, president of the RV Group of GE Capital Finance, said last year was a positive year overall, and “2015 is looking as good as or better than we saw in 2014. We’ve got a great economy, we’ve got a strong dealer base and we’ve got great manufacturers.”

Hyland went through the results of the recent RVBusiness/GE Dealer Survey that showed:

• 71% see product quality as a top concern and an opportunity for improvement, while 58% think the current format of model-year introduction is unacceptable.

• Online sales are a contentious issue, but they contributed significantly to the revenue for 57% of dealers.

The long and short of it, Hyland said, is “There’s a lot of positive momentum out there in the economy. Dealers are profitable and growing. There’s opportunity for closer collaboration between dealers and their partners. When times are good, it’s time for change. During an economic crisis, we may make a lot of change, but that change is reactive. Now we’re in a growth mode. We’re in a positive environment, so we have the opportunity to make proactive change, to make our industry better for the future.”

And that future, said Kampgrounds of America Inc. (KOA) CEO Jim Rogers, is a bright one.

Citing KOA’s success this year, he reported, “For the first 90 days of 2015, our business is up 18%. Reservations for the summer are up 23% over last year’s already high numbers. We are on fire.”

But that isn’t just the case at KOA. Rogers pointed to the results of the 2015 North American Camping Report, an industrywide study commissioned by KOA that surveyed 5,800 campers in the U.S. and Canada. Results indicated:

• While only 21% of the 46.2 million actively camping U.S. households stayed in RVs last year, the potential RV market already at campgrounds is huge.

“This isn’t trying to convince Americans to go camping. This is about trying to get campers to buy an RV,” Rogers counseled the RV leaders. “Such a large percentage are starting in a tent and are, indeed, moving up.”

That 18-35 demographic is key to the future, said Rogers. “The opportunity here is we see the youth intending to camp longer,” Rogers said. “We see the opportunity. We want to capitalize on it.”

In closing, Rogers stated, “So many people are looking for purpose in their lives and their jobs. We are, indeed, giving Americans the opportunity to see this wonderful country and we give them a sense of hospitality and you provide the accommodation.”

When Rogers finished speaking, Sherman Goldenberg, publisher of RVBusiness and Woodall’s Campground Management, presented a check for $2,500 to Rogers and to Hope Perkins, chairwoman of KOA Care Camps, a nonprofit organization that supports 114 oncology camps for children with cancer.