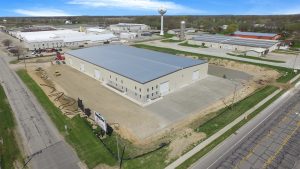 inTech RV, builder of the Flyer line of microlite campers and toy haulers, announced that the company will be moving into its new 42,000-square-foot facility in Nappanee, Ind., over the next few weeks.

According to a press release, the new building is located one block east of an existing 94,000-square-foot facility that houses parent inTech Trailers, which manufactures high-end, all-aluminum motorsport and industrial trailers.

The new facility will allow inTech to increase production of its existing lines, which were introduced to the market in late 2015.

Sales and Marketing Director Rich Schnippel stated, “The expansion is coming at the right time. Orders have been stronger than we anticipated with more dealers wanting to capture their share of the microlite trailer phenomenon.”

The expansion will also give inTech RV the needed space to create a new line of products that it will be introducing at the Elkhart Open House later this fall.

For more information regarding inTech RV visit www.inTechRV.com or contact inTech RV at 574-773- 9536 or e-mail at [email protected]