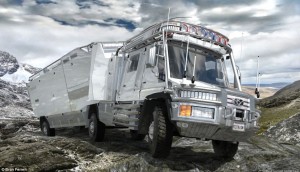 It is the ultimate recreational vehicle, built to make one 4-year-old extremely happy.

The Daily Mail reported that the KiraVan, a giant custom built off-road truck, is capable of traveling almost anywhere in the world and was designed by 61-year-old Californian inventor Bran Ferren. He created the RV for his daughter Kira, who has her own pop tent on top of the truck.

The incredible interior boasts everything from a fully stocked office, kitchen and bedroom, to a popup tent on the roof for Kira, Ferren’s four year daughter the truck was designed for.

Ferren, the cofounder and chief creative officer of Applied Minds, a world-renowned tech and design firm whose on-the-record customer list includes General Motors, Intel, and the U.S. Air Force, has spent four years traveling the world to talk to experts as he finalized the truck’s design.

The huge six-wheeled vehicle can drive down mud-swamped roads, and even rock covered roads thanks to kevlar reinforced tyres.