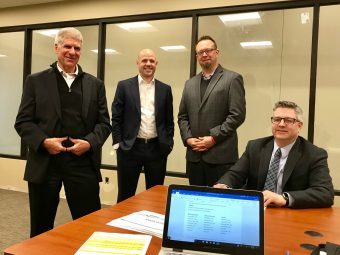 Beginning with the early April grand opening of a new 30,000-square-foot store in Des Moines, Iowa, RV One Superstores Inc. is anticipating a blockbuster year as the company is firmly in expansion mode while projecting revenues in excess of $500 million.

In addition to the Iowa opening, RV One’s docket for 2018 includes the unveiling of a new Tampa store on Nov. 1, the all-new Airstream of Central Florida on Nov. 15, and a new Orlando facility on Dec. 1. The company also has locations in Albany and Buffalo, N.Y.

RV One President and CEO Don Strollo told RVBUSINESS.com that the building boom is in response to the still-robust consumer demand for RVs, and from RV One Superstores in particular. Revenue for the company’s first two months of 2018, he reported, was up 15.14% – $60 million versus $52 million – over the same period last year. If it holds true as expected, 2018 would represent the 18th consecutive year of revenue gains, he noted. In fact, RV One has ordered an additional $28 million in inventory to meet the projected sales demand.

“In 2017 we surpassed a company milestone of 1,000 unit sales in a month. This year we believe the new Des Moines facility will help push us closer to 1,250 units a month,” Strollo said. “Demand is simply stronger than people think. I’ve heard recently that a lot of manufacturers and/or retailers are seeing some softening. But, that’s not what we’re seeing. I think the industry is still on this pretty significant upswing.”

The new Des Moines location, which is modeled after the flagship store in Albany, is 30,000 square feet with 16 bays on 14 acres of land fronting Interstate 80 and next door to a large Bass Pro Shop. The previous location offered a 7,000-square-foot building on four acres in town.

“The Des Moines store has an outdoor theme décor complete with indoor full-size pine trees, rocks – even an indoor waterfall. Customers love to see the experience they are buying while shopping for an RV,” Strollo added.

Also of note, the Des Moines facility will feature a store-within-a-store dedicated to Airstream units and the addition of motorized lines from Newmar Corp.

Strollo said the location held a job fair earlier this month that attracted 100 candidates, about 40 of which will be hired to join the current staff of about 25, which will be needed to handle sales that are expected to double volume at the previous location.