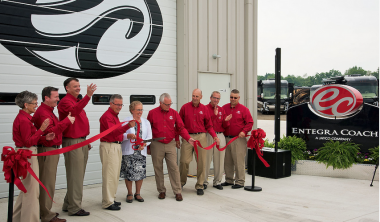 Her sons, Jayco Chairman Wilbur Bontrager and Jayco President and CEO Derald Bontrager, were at her side as she cut the ribbon to ceremoniously open the 184,000-square-foot building dedicated to manufacturing the company’s Entegra division of luxury diesel motorhomes.

In remarks to the audience, both Bertha and Wilbur Bontrager reflected on how far the company has come since its 1968 beginnings, when her late husband and a handful of employees built a tent camper in the family’s 4,000-square-foot barn. “This is an exciting time for us and an awesome experience for me,” Bertha told the crowd, adding that she hopes people enjoy their stay in Middlebury.

Wilbur Bontrager touted the building’s green initiatives, including the generous use of skylights that will admit sunshine to “lift the spirits” of employees inside. “This is really part of our overall strategy of sustainability practices,” he said. “Recycling our waste is paramount, reusing materials where viable and appropriate, saving on energy and water usage, and ultimately becoming landfill-free – which, incidentally, is nearing reality.”

In his address, Derald Bontrager said the company is on track to build 45,000 RVs this year, but he pointed out they are still built “one at a time for one customer at a time.” The new Entegra facility will reflect that creed, he said, adding that “every product coming out of this door is going to be of the highest quality that we could possibly humanly produce.”

Jayco Motorhome Group President Tadd Jenkins — who said it took 1,100 truckloads of concrete to pour a floor that is the equivalent of three football fields long — stated the new building is “evidence of the dedication and the desire to be in the RV business of our board of directors and our owners. When we presented this plan to them it didn’t take them long to decide this is what we need to do.”

The ribbon-cutting ceremony was part of a series of events designed to christen the new building and celebrate the five-year-old division’s emergence. Indeed, Jenkins had earlier pointed out that Entegra owns 35% market share in diesel coaches of at least 600 hp, and the Jayco Motorhome Group for 18% overall. 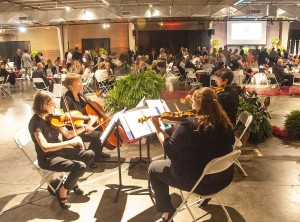 Wednesday night, an impressive crowd of several hundred people, including 150 Entegra Coach owners who converged this week on the northern Indiana locale in conjunction with this week’s Entegra Coach events, gathered for a first-ever Jayco event at the RV/MH Hall of Fame that included a catered dinner. The proceedings offered guests live string background music, remarks from the company’s senior executives and the rollout of the Jayco Motorhome Group’s first 2016 Entegras — including two Anthem and two Aspire Class A’s.

In a dramatic twist near the end of the evening, a new 44-foot Anthem, featuring redesigned front and rear caps, pulled into the party — at least partially — through a garage door on the south side of the main banquet room. “The coach is pretty much brand new from start to finish,” said Jenkins to the crowd’s applause, as the smoke/steam cleared from the orchestrated unveiling of the new Anthem.

Jenkins, based on Internet communiques, pointed out how much Entegra owners had been anticipating the launch of the new 2016 coaches, including the Anthem on display inside the dining hall, replete with MCD shades, industry-first Tempur-Pedic mattresses, Bose home theater systems, JBL sound systems and exterior 40-inch HD LED TVs.

“Never in the history of the RV business has there ever been a rollout with dealers and retail customers at the same time,” Jenkins told RVBUSINESS.com in a separate interview. “It could prove to be a new approach (for new-model introductions.)”

Initially, Jayco intends to build three Entegras a day in the new plant and ramp up production to four coaches in the fall. “The plant was designed to do nine a day, depending on the market,” Jenkins said.

Entegra motorhomes lined the grounds at the Hall of Fame

While boosting Entegra’s production, the new factory will allow Jayco to dedicate its former Entegra production line in a nearby plant to building Jayco Class C and gas Class A motorhomes.

The 2016 Entegra lineup — Anthem, Aspire and Cornerstone — has been completely redesigned from an exterior perspective, Jenkins said. “We hired a Detroit firm to help us with the redesign,” he said. “It’s over-the-top cool. This isn’t just moving the headlights around a little.”

Additionally, the interiors of the Aspire and Anthem have been changed substantially, and a new 45-foot bath-and-a-half floorplan powered by a 600-hp Cummins ISX engine has been added to the top-of-the-line Cornerstone.

“The interior of the new 45A Cornerstone is very different,” Jenkins said. “We will carry that down to the Anthem later this year. And we are working on a bunkhouse model for the Aspire.”

Some options in the Cornerstone, including a premium sound system and paint, have been added as standard features. Base retail prices of the Entegra lineup range from $352,000 to $623,000.

The opening of the new facility comes at a time when the high-end motorcoach segment “is a little soft,” Jenkins noted. “However, we are at double-digit percentages in retail sales growth year-over-year. We are taking market share from somebody.”